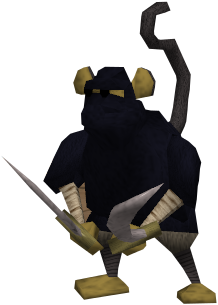 Location:
Ape Atoll
Lifepoints:
2700
Max Hit:
216
Race/Type:
Animal
Examine Information:
A large ninja monkey wielding two scimitars.
100% Drop:
Monkey bones.
All Possible Loot:
None.
Strategies:
Oipuis is an intelligent monkey guard currently living in the island city of Marim. Oipuis is one of several guards that can appear if they talk to a monkey on Ape Atoll while in human form. He appears along with several level 149 Monkey Guard.

He is similar to Padulah except that he cannot be killed. If he hits the player, the player will appear in the Ape Atoll prison. Other guards such as Oudai and Duke can appear in the same way.