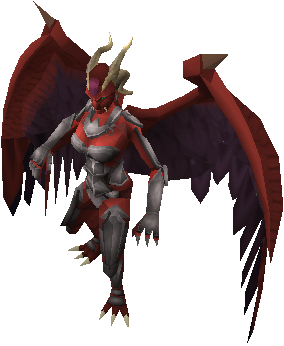 Location:
Ancient Prison in the God Wars Dungeon.
Lifepoints:
200000
Max Hit:
8000
Race/Type:
Demon
Examine Information:
Even the gods fear it.
100% Drop:
Big bones.
Rare Drop Table:
Additional drops can be obtained from the Rare Drop Table.
All Possible Loot:
Strategies:
Nex has 5 different phases in this order: Smoke, Shadow, Blood, Ice, and Zaros. She has a special attack in each of the four phases and is best killed with Ranged.

Special attacks~
Smoke phase - No escape. She flies down one of the 4 bridges and hits whoever is standing on the bridge. She flies through for 1-3000 damage.

Shadow phase - Fear the shadow (also known as a shadow trap). She spawns a shadow circle underneath every player that is relatively close to her. The player has a about a second and half to click away from that circle or get hit for up to 4000 damage.

Blood phase - Blood sacrifice. She chooses a random player and fires a blood burst at them. Every other player has their current prayer points halved.
Siphon. She stops attacking momentarily to crouch. Any damage done to her while she is siphoning will heal her instead. Players are advised to count as she uses this for exactly 4 hits after she has done the blood sacrifice. Remember: no one should attack her while she siphons.

Ice phase - Ice cage/prison. She encases a random player, or the player furthest away from her, in 8 icicles of which his/her teammates will have to break to free them. If the icicles aren't broken in time, the encased player can take up to between 5000 and 6000 damage.
Contain this. She creates an icicle square around herself which momentarily freezes and deactivates the prayer of any player hit by it.

Final phase - Nex will heal herself from 30,000 Lifepoints back to 60,000 and activate Turmoil, lowering her target's stats. She then starts to switch between using Soul split to heal herself and Deflect Melee. When the Nex dies, she will use the Wrath prayer, resulting in 200-300 damage.