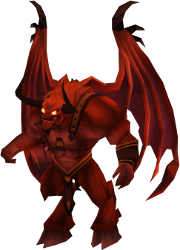 *Once five commendations can be found and once all are used they will no longer be dropped.
Strategies:
Kal'gerion demons are based on the five Kal'gerion demon bosses encountered while Dungeoneering: To'Kash the Bloodchiller, Har'Lakk the Riftsplitter, Bal'lak the Pummeller, Yk'Lagor the Thunderous and Kal'Ger the Warmonger, but unlike the bosses, they all share the same attacks and stats.

These demons are very powerful and it is highly recommended to use Protect from/Deflect Melee or Soul split to greatly reduce the damage you'll take. It is also advisable to use Extreme or better potions and stat boosting Prayers/Curses while fighting them to penetrate their strong defence and strengthen your own.

Although they have no specific weakness, Magic is quite effective and the use of Ice or Blood Blitz/Barrage has the added bonus of freezing the demons or healing you.

The demons themselves are capable of hitting in excess of 1,000 with their standard melee attack, but they also have the ability to use two special attacks once per fight, these are: It should be noted that you can avoid both of these attacks by hiding behind one of the rocks in the room just before it launches the attack.

In addition to the two normal special attacks, the demons are capable of using a third if you stand behind a rock for too long. This attack is similar to one used by Har'Lakk the Riftsplitter in that the demon will summon a number of flame portals around you that deal rapid 400s until you move away. Unlike the other two special attacks, the demon can use this an unlimited number of times.

90 Slayer is required to be assigned a Kal'gerion demon assignment by Kuradal or Morvran, but not to kill them.