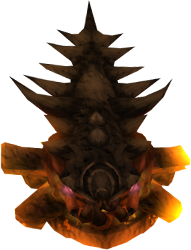 Location:
Wave 37 of the TokHaar Fight Kiln.
Lifepoints:
48000
Max Hit:
240
Race/Type:
Elemental
Examine Information:
This is the huge head of Har-Aken. Who knows how it ended up here?
This huge tentacle spits spines.
This huge tentacle launches balls of plasma.

100% Drop:
None.
All Possible Loot:
Strategies:
Har-Aken is the boss and final monster you will fight during the TokHaar Fight Kiln.

To kill Har-Aken, you must defeat the head which emerges from the lava for 27 seconds every 72 seconds. During the time that the head is submerged, it will attack you with tentacles which either use Ranged or Magic from a distance, or Melee up close.

If you have picked up and saved the Constitution crystals which spawn after certain waves, then this fight will be significantly easier. When the wave starts, you can use one of these crystals to boost your life points to a constant 15,000 meaning that you won't have to worry about taking damage or healing at all. The fight should take no longer than 10 minutes, so the three crystals should last more than long enough to kill Har-Aken.

As soon as the fight starts, you should run to the south side of the arena and watch for the head to emerge. It never appears on the north side so you can ignore that completely and watch the south, east and west. Build up your adrenaline on the tentacles while waiting for the head and once it appears, use a threshold or ultimate ability on it and then attack with as many basic abilities as you can before it submerges.

Upon defeating Har-Aken, you will complete the Fight Kiln and be offered the choice of claiming either a TokHaar-Kal-Ket, TokHaar-Kal-Mej, or TokHaar-Kal-Xil depending on which attack style you dealt the most damage with, or an Uncut onyx.