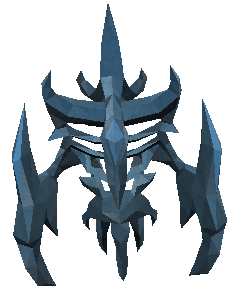 Location:
Baneore Cave (Fairy Ring Code: D K Q).
Lifepoints:
40000
Max Hit:
980
Race/Type:
Elemental
Examine Information:
A mysterious ice creature, infused with power drawn from the stone.
100% Drop:
None.
Rare Drop Table:
Additional drops can be obtained from the Rare Drop Table.
All Possible Loot:
Strategies:
Up close the Glacor will use mainly melee attacks and from a distance will switch between magic and range attacks. When the Glacor attacks with its right arm, it will fire a ranged attack and with its left it will use a magic attack. If timed correctly, switching to the correct protection prayer will block damage from both types of attack.

Therefore, it is highly recommended to cast fire spells, preferably surge or wave, from a distance, giving the player time to switch to the appropriate prayer and negating its melee attack. The Glacor has a special attack, which consists of hitting the floor with both hands and and firing a group of icicles, this attack can be avoided by simply moving to another square, however, if the player does not move, this attack will hit up to 50% of the players current lifepoints.

At 50% health, the Glacor will summon 3 glacytes to aid it (Unstable, Enduring, Sapping glacyte), during this time it will be invulnerable to attacks and so it is a good idea to lure the glacytes away and hide behind one of the nearby pillars, to avoid attacks from the Glacor.

Once the final glacyte has been killed, the Glacor will adopt the special ability of that particular glacyte for the remainder of the fight. Due to this, it is recommended to kill the unstable glacyte last, as when the Glacor performs the explosion sequence it will be on 10% of its lifepoints and can be finished quickly.

This monster is only accessible after completing Ritual Of The Mahjarrat. The Baneore/Glacor cave can be accessed using fairy ring code: DKQ.

This Data was submitted by: Javezz and Ksb Single.