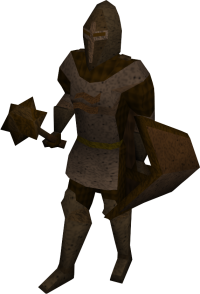 Location:
Champions' Guild Basement.
Lifepoints:
9000
Max Hit:
1010
Race/Type:
Elemental
Examine Information:
Champion of the earth warriors.
100% Drop:
None.
All Possible Loot:
None.
Strategies:
The Earth Warrior Champion may be fought as part of the Champions' Challenge Activity after a player receives a earth warrior champion scroll. Speak to Larxus located in the Champions' Guild basement with the scroll at hand to be able to accept the challenge. This champion has a max hit of 90 lifepoints.

The rules of the fight prohibit a player from using Prayer.

432 Slayer and Constitution experience is awarded to players that can defeat this champion. A banner proclaiming victory over the champion serves as an additional reward following the champion's defeat.

The music track, 'Victory is Mine', is unlocked upon entering the arena during a champion's challenge fight.