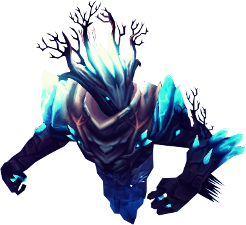 Location:
Prifddinas Grand Library during Plague's End.
Lifepoints:
19250
Max Hit:
1108
Race/Type:
Animated
Examine Information:
A deathly horror through which no light can pass. (In combat)
Light can pass through him now. (Once defeated)
100% Drop:
None.
All Possible Loot:
None.
Strategies:
The Dark Lord is a fragment of Seren's psyche and the physical manifestation of her fascination with death. Created when Seren turned herself into crystal and shattered after the God Wars, the Dark Lord is obsessed by the idea of death and was ultimately drawn to the Death Altar found beneath the mountains west of Ardougne. In an attempt to seal the it away, the Hefin Clan constructed the Temple of Light around the altar and there it remained until Lord Iowerth sought to free it and use its power to re-grow and control Prifddinas.

During Plague's End you will encounter the Dark Lord after activating the Iorwerth seal in the Prifddinas Grand Library. After a conversation with it, you must defeat it after activating each of the remaining seals in order to allow the light to reach Prifddinas in its crystal form. You should use Protect From/Deflect Magic to reduce damage from the Dark Lord and Greater shadows' attacks and watch out for its special attack in which purple smoke will gather around you and then hit 10% of your maximum lifepoints every 2 seconds until you move.