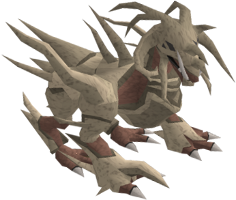 Location:
Inside the cave southeast of Red Dragon Isle in the Wilderness, north of the eastern Ruins.
Lifepoints:
100000
Max Hit:
3000
Race/Type:
Undead
Examine Information:
A vision of supernatural horror.
100% Drop:
None.
Rare Drop Table:
Additional drops can be obtained from the Rare Drop Table.
All Possible Loot:
Strategies:
The Corporeal Beast is one of the strongest monsters in the game and has a number of unique abilities that make it even more dangerous. However, for those capable of surviving a number of kills, the beast can be quite profitable and even has the potential to make you millions if you are lucky enough to obtain a spirit shield sigil drop.

Before attempting to fight the beast, you must be aware that if you die you will not receive a gravestone. Your items will instead be dropped on the floor and after 3.5 minutes, they will be visible to any other players. After an additional 1 minute, they will disappear completely. Secondly, any weapon other than a spear will deal only 50% damage to the beast and therefore it is highly recommended to use a Chaotic spear or Zamorakian spear to fight it. Furthermore, Summoning familiars should not be used as they will be devoured by the beast and partially heal it.

The beast uses three main Magic-based attacks and these are: In addition to these attacks, the beast also uses a stomp attack on any player that tries to run under it. This is capable of hitting over 5,000. Finally, at a certain amount of remaining health depending on how many players are present, the beast summons a Dark energy core. Any player that stands next to or on top of the core will rapidly damaged for up to 600 every 2 seconds until they move. Any damage dealt by the core also heals the beast for the same amount. The core can be killed, but it will respawn soon after.