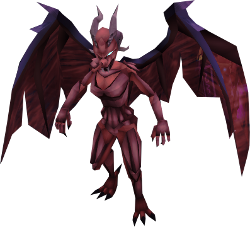 Location:
The Pit on Freneskae during and after Fate of the Gods.
Lifepoints:
25000
Max Hit:
768
Race/Type:
Nihil
Examine Information:
A vampyric abomination.
100% Drop:
None.
Rare Drop Table:
Additional drops can be obtained from the Rare Drop Table.
All Possible Loot:
Strategies:
*This has a confirmed drop rate from Nihil of 1/1,000,000, so do not fight these monsters with the expectation of receiving a drop.

Blood nihil are a creature created by the god Zaros through genetic experimentation with vampyres and are first encountered during Fate of the Gods.

Nihil are one of the most powerful non-boss monsters in the game and you must be well prepared before fighting them. They have very high defence and extremely accurate attacks and therefore it is recommended to use stat-boosting potions and/or prayers to break through their defence and increase your own. It is also highly recommended, if not required to wear the Shard of Zaros when fighting the Nihil as they are aggressive without it and you will be killed very quickly after being attacked by all of the Nihil in The Pit. Furthermore, each Nihil is capable of using a special attack based on the Ancient Magicks spells that share their name.

The Blood nihil signify their special by hissing before surrounding themselves with a shield that heals them for 100% of the damage you deal, meaning that you must stop attacking immediately or you will have a long fight on your hands. During Fate of the Gods they are also able to heal the other Nihil during their special, but when fought after the quest they no longer will.

You can persuade Kuradal to assign Nihil as a task at level 76 Slayer for 50 reward points.