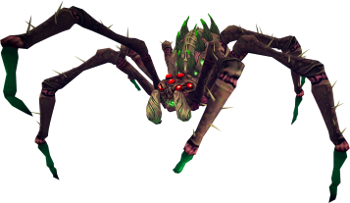 Location:
Araxyte Hive, southeast of Port Phasmatys.
Lifepoints:
300000
Max Hit:
2500
Race/Type:
Arachnid
Examine Information:
I don't think a newspaper is going to cut it.
100% Drop:
None.
All Possible Loot:
None.
Strategies:
Araxxor is a giant araxyte spider and the most challenging solo boss in the game, although it can be fought with one friend at the expense of greatly increasing the power of its attacks.

Araxxor can switch between all three combat styles and this is indicated by the color of the legs and spines (Red for Melee, Blue for Magic and Green for Ranged). It will use different attack for each style as well as a number of special attacks and these are:

To fight Araxxor, you will need to first make your way to the bottom of the Araxyte Hive and click on the webbed entrance found there to either enter the public boss room, although only two players can access this per world, or set up an instance for 200,000gp that will last until you either defeat Araxxor or die. Note that if you do die, then you can access the Hive's graveyard by right-clicking the entrance to the hive.

Once you've entered the boss room or set up your instance, Phase 1 (out of a total of 3) of the fight will begin. You'll find yourself in a large chamber with three paths on the opposite side. One path will be blocked by a pile of rocks (the path blocked changes every 4 days) and the other two will be covered by large webs. To continue, you will have to set one of the webs alight and fight for 1 minute until it burns away.

Once done, it is important that you get Araxxor as close to 0 lifepoints (he'll regenerate back to 100,000 straight away) before entering the path and starting Phase 2 and likewise before leaving the path and starting Phase 3. If Araxxor's life points reaches 0 in phase 1 or 2, he will be healed for 5000 lifepoints. This is because at the start of Phase 3, Araxxor will be healed by the combined number of lifepoints he has left at the start of Phase 1 and 2. Each path has a different combat scenario and these are:

As mentioned above, at the start of Phase 3, if you didn't get Araxxor down to 0 lifepoints before starting Phase 2 and 3, a group of spiders will drop down and heal him by the number of lifepoints he had left in each phase. Also, if you chose the east path then the spiders from the north path will now spawn and help Araxxor.

During Phase 3, Highly acidic spiders will occasionally spawn and you should lure Araxxor into it to raise the acidity metre. However, do note that each spider heals Araxxor by 5,000 and raises the rage metre by 20%, so be wary of your lifepoints. Furthermore, watch for when Araxxor fires a silk ball at you which will become a regular Acidic spider and follow you around. Watch the bar above the spider and make sure that it does not touch you when the bar is full as it will explode and kill you instantly.

At the end of Phase 3, a cutscene will play in which Araxxor runs away before surprisingly being killed by another spider. Phase 4 and the remainder of this fight then takes place against this new spider, Araxxi.

Each time you defeat both Araxxor and Araxxi, their power increases the next time you fight them, each and every time until it resets at 12:00am GMT.

The chance of receiving better drops is increased by the Luck of the dwarves.

This Data was submitted by: Javezz, With Faith, and Ksb Single.