1205
Vengeance
Description:
Basically miniquests that take place in dungeons, the Fremennik Sagas are stories told to you by Skaldrun. Unlike normal stories though, you will re-live them as one or more of the participants. This isn't your Grandmother's stories where you can fall asleep, you are responsible for getting these participants through their stories!

Note that the Sagas can be completed in ANY order. You only need to have unfrozen Skaldrun and have found the item associated with the specific miniquest in order to begin it.
Difficulty:
Intermediate
Length:
Medium
Skill Levels Required:
Quests Required:
None
Items Needed:
You must have no items equipped or in your inventory.
Rewards:
Starting Point:
Speak with Skaldrun in Daemonheim once you have unfrozen him and you've found the Collection of Swords in floors 12-21.
Instructions:

To start the Sagas, you must first unfreeze Skaldrun from a random frozen floor of complexity level 2 or higher. To unfreeze him, you light a fire next to him with logs and a Tinderbox or cast a fire spell on him. Once he has been rescued, you must speak to him fully before he will return to the surface. Once he has returned to the surface, he will be found West of the Gorajo hoardstalker and you can speak to him to start the Sagas.

The Sagas can be completed multiple times. However, you will only gain the full rewards the first time you complete them. During future replays, you will only receive Dungeoneering tokens. For each Saga there is a base number of tokens you will receive for completion. Unfortunately, with each successive replay, your reward will be reduced by 20% until after you have done it 4 times, as you will always earn at least 20% of the base token reward. This token reduction will reset daily at midnight Game Time.

When you lobby during a saga, if you have reached a checkpoint, you will be able to continue from that point when you ask Skaldrun about that story once again. Be aware that you cannot have more than one story going at a time. So, if you have started and reached a check point in one saga, if you choose to start another one, all progress will be lost in the first saga.

To be able to start the Sagas, there are several objects that must be found within a regular dungeon beforehand. These items serve to jog Skaldrun's memory. So, if you haven't found the object, you can't tell him about it and remind him. To begin this saga, you must have found the Collection of Swords on floors 12-21.

After finding these objects, you will always need to talk with Skaldrun about each one before the option to complete it will become available. Note that he will only remember 1 item at a time, so it is not advised to wait to talk to him until after you have found all 5 objects. It is perfectly acceptable to wait to complete The Sagas until you have access to them all though.

For an unabridged completion, you must complete the following actions during the Saga...

In this Saga you will be controlling a Forgotten warrior whose party was savagely attacked by a group of 4 adventurers. Travel with her as she attempts to gain vengeance for her murdered brother, Taevas. Should she die during this saga, the story will end and you will need to start again. Despite having a health bar that has a maximum of 1900 points, the highest you can raise her health is 760; eating Giant flatfish will gain 100 life points each.

The map below indicates which room each step takes place in, for easy reference. 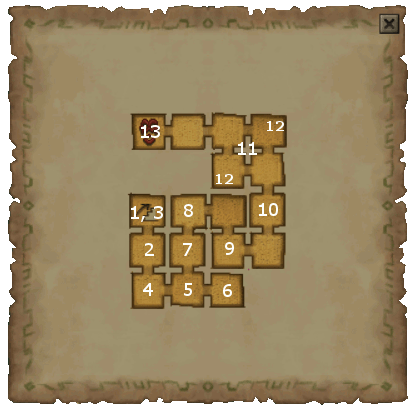 Congratulations! You have completed the Vengeance Saga!