1158
Benedict's World Tour
Description:
World-weary beast of burden Benedict Encumberyak is missing some important items, and needs you to visit various picturesque Gielinor locales to track them down - perfect for drinking in those glorious NXT visuals.
Difficulty:
Intermediate
Length:
Short
Skill Levels Required:
None.
Quests Required:
None.
Items Needed:
None.
Items Recommended:
Wicked hood and Ring of Dueling (any charge)
Rewards:
Up to 4 Small XP lamps and 2 Large XP lamps for Pay to play.
Up to 2 Small XP lamps and 1 Large XP lamp for Free to play.
Starting Point:
In the building North West of the Varrock lodestone.
Instructions:

Find Benedict in the building just inside of the South Varrock city entrance, North West of the lodestone. He will inform you that he has been with his master since he was a "pup", but now that he is old he has misplaced some of his master's possessions and would like your help in locating them. Once you have agreed to help, he will give you a Scrapbook that contains doodles of the places these items have been left. 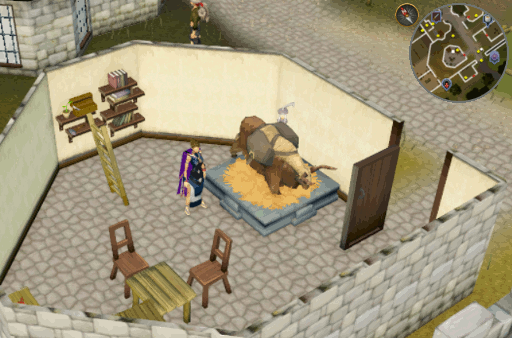 As you find each of these items, Benedict will appear and exclaim that you have found one of the missing items and ask you to take a closer look around to make sure there are no other items in the area. A short cut scene will then show the area surrounding you, giving you a chance to see the world via NXT. He will then disappear in a cloud of smoke, with the item, and tell you "On to the next location!". There is a total of sixteen locations.

THIS IS THE END OF THE FREE TO PLAY LOCATIONS.

As a conclusion, Benedict will once again give you a Small XP lamp and a Large XP lamp. He will also ask you to keep this little mishap just between the two of you.

*There are several ways to reach: Runespan, Castle Wars, Tuska's Back, Mazcab, and the Sorcerer's Tower. Below are the various ways to reach them.