0968
Vyrewatch Corpse Burning
Description:
An addendum to Mort'ton Shade Burning mini-game. Upon completing the Legacy of Seergaze you unlock the ability to kill and burn the mysterious Vyrewatch. The burning of these creatures may bring in a valuable reward.
Skill Levels Required:
40 Firemaking.
Quests Required:
Legacy of Seergaze.
Items Needed:
Pyre logs (Teak or higher), Food, Armor, an Ivandis flail or Blisterwood weaponry (Polearm, Staff or Stakes).
Skill Levels Recommended:
A high Firemaking level
A high combat level since the Vyrewatch can hit very hard.
Items Recommended:
Some Guthix balance potions and any Blisterwood weapons you may have.
Starting Point:
Meiyerditch, east of Burgh de Rott.
Is this MiniGame Safe to play?:
No
Getting Started:

These creatures are located east of Burgh de Rott, within the city of Meiryerditch and Darkmeyer to the North. Vyrewatch can also be encountered during the Temple Trekking/Burgh de Rott Ramble mini-game. There are 6 variations of these creatures, each of a different combat level.


All drop only one item, the Vyre corpse. 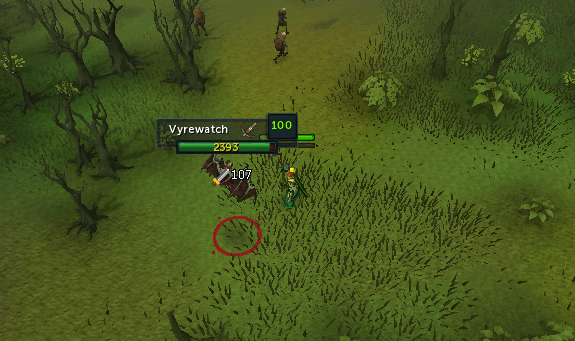 An Ivandis flail is made during the Legacy of Seergaze quest. When the Vyrewatch are down to less than half of their health you can use the flail's special attack on the Vyrewatch. This causes the Vyrewatch to be suspended frozen in mid-air and allows you to attack then without retaliation. When wielding the Ivandis flail, a charge is used up each time you activate the special attack. The flail turns to Flail dust after all 30 of its charges are used.

How To Make A Ivandis Flail:

Hint: Take several Silver sickles, Emeralds, Enchantment runes and a Chisel to the nature altar and make several Enchanted sickle emerald (b) as you bless each Sickle. This will save you a substantial amount of time when making new Ivandis flails.

Blisterwood weapons are made during The Branches of Darkmeyer quest. They are stronger and faster than an Ivandis flail and so it is highly recommended to use them if you can.

How To Make Blisterwood weapons:

EITHER: Wear highest level melee armor possible. A Bunyip pouch (level 68 Summoning) can be used for healing. When the Vyrewatch get to less than half of their health use the attack special of the Ivandis flail. Using a Guthix balance potion on the frozen suspended vyrewatch can do up to 19 damage to them, but will not necessarily kill them.

OR: After completion of Branches of Darkmeyer, you simply have to fight the Vyrelords and Vyreladies outside the bank in the upper tier of Darkmeyer. When healing is necessary, go into the bank room and shut the door in order to get all life points restored. This method ensures that no food is necessary and, should you lag or such, your grave will be right next to the teleport from Drakan's medallion.

The only reason this strategy is valid is due to the rapid health recovery induced by being at a bank.

Take an inventory full of Corpses, Pyre logs and a Tinderbox down into the basement of the Paterdomus Temple, west of Canifis. There, go down the stairway to access the Columbarium. 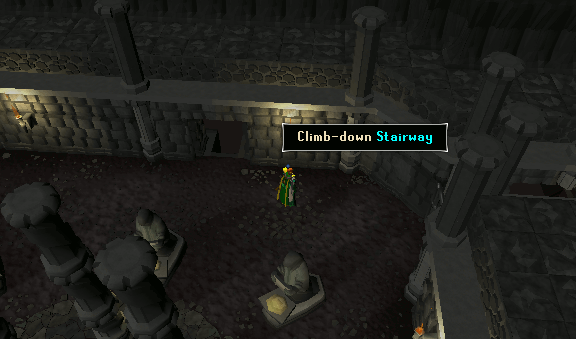 Once inside the Columbarium, use your Pyre logs on a funeral pyre, followed by the corpse. Then, light it to obtain a Columbarium key and 79 Prayer XP. The Firemaking XP will depend on the type of pyre log used. For more information on how to make Pyre logs, refer to the Mort'ton Shade Burning mini-game guide.

Hint: Maple pyre logs are the easiest to make due to the readily availability of Maple logs on the Grand Exchange. 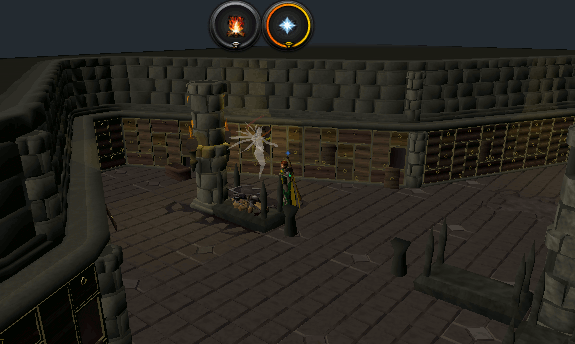 Use the Columbarium key on the wooden recess to receive a reward, in the form of an item. 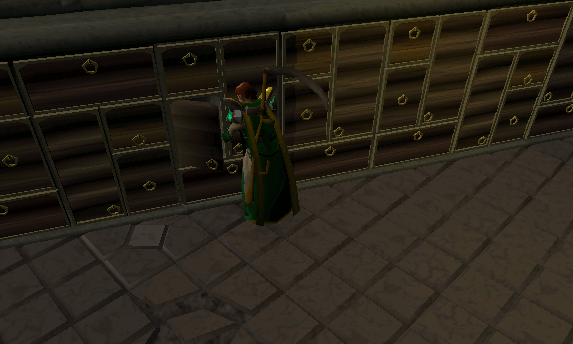 For each Vyre corpse you burn you will receive 79 Prayer experience, independent of which pyre logs you used.

For each Vyre corpse you burn you will receive Firemaking experience, depending on which pyre logs you used.

For every 50 Vyre corpses burned, you receive an improvement to your Ivandis flail, which allows you to hit harder and more accurately. You get this improvement a maximum of 10 times. Once you have burned 500 corpses, you will receive a message that you have mastered the flail. You can check your progress by searching the lectern at the southern corner of columbarium - you will then get a message informing you how many vyrewatch corpses you have burned: