0606
TzHaar Fight Pit
Description:
On the western outskirts of the TzHaar city lies a large arena known as the TzHaar Fight Pit. In this free-for-all acticity players fight eachother with no restrictions until the last one standing is crowned champion.
Skill Levels Required:
None.
Quests Required:
None.
Items Needed:
Armor and a weapon (any kind).
Skill Levels Recommended:
High Combat, Magic, and/or Magic levels.
Items Recommended:
Fire cape, Food, and Potions.
Starting Point:
The TzHaar Fight Pit lobby in the northwestern part of the TzHaar City.
Is this MiniGame Safe to play?:
Yes
Getting Started:

How to get there:

Make your way to the top of the Musa Point Volcano on Karmaja and walk through the middle to the entrance of TzHaar City. The Fight Pit itself can be found in the southwestern corner of the city. There are various ways to reach the TzHaar City. 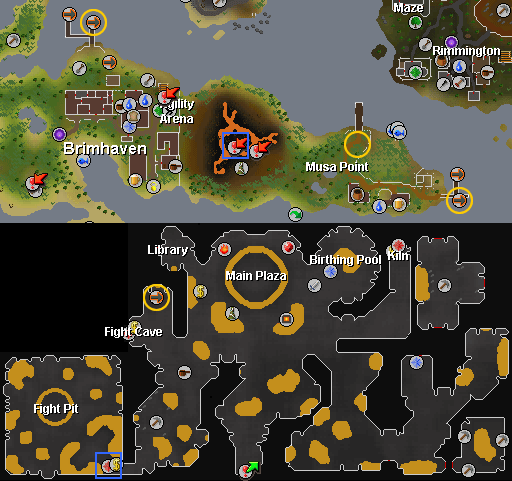 Prepare yourself for the battle by talking to Tzhaar-Mej-Kah who will give you information about the way the fight pit works, and can also be used as a bank. Once you are ready, its time to enter through the entry portal. 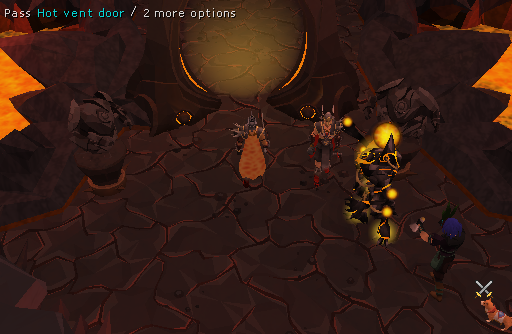 To join a game enter the waiting room. You may have to wait if a game is already taking place. A new game will start when someone is crowned champion in the current game. If there is no game taking place, the next game starts when there are at least 2 players in the waiting room. While you are waiting for a new game to start you can use the viewing orb in the center of the room to watch the current game from various pillars in the Fight Pit arena. 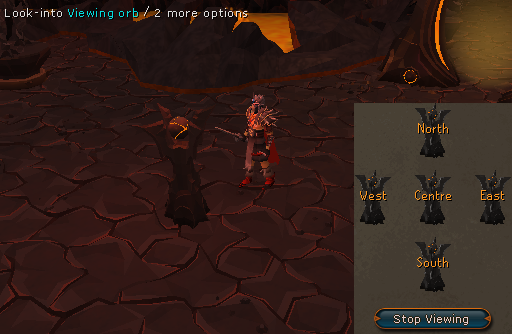 Once in a game, you will have to wait for 1 minute before you can start attacking. After that minute, Tzhaar-Mej-Kah will signal that you may start fighting. Use this minute to find meet up with your friends or hide and take cover behind the various rocks or near the walls. During the fight the name of the last game's champion and the number of foes left in the current game will be shown at the top of the screen. This is a safe activity so do not panic. If you die, you will not lose anything and you will reappear in the waiting room. If at any point you wish to leave the game simply step through the barrier into the waiting room. 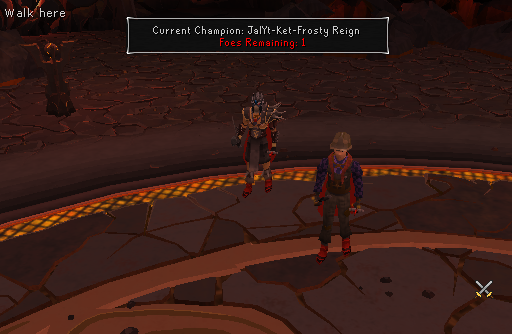 If the game is taking longer than 5 minute waves of various Tzhaar monster will appear to finish everyone off. Among these monsters are Tz-Kih (level 22), Tz-Kek (level 45), and Tok-Xil (level 90). These monster use a variety of attacks and can drain your Prayer. A few minutes after the appearance of the Tok-Xils, all the players in the game will rapidly lose 10 life points until everyone is dead, after which the game wild end.

The most commonly used strategy is to team up in with against the other enemies. If teaming up turned out to be the right choice, the players of a team either turn on each other or take turns winning to end the game.

Some players or teams like to hide along the walls and rocks in the arena while they wait for others to kill or weaken eaother. This is usually done in an attempt to save health and prayer. However, experienced players keep an eye on the amount of foes left and will hunt the remaining down if they cannot find them in the center of the arena. This is sometimes also done in an attempt to trick the remaining player into leaving the arena thinking they won. The person who hid will then win by forfeit.

The last player standing is rewarded with Tokkul, the money of the Tzhaar. The amount is based on how many player you have participated, their levels, and how many times you have been the champion before. Anyone who walked out during a game is also not included. If you have a Fire cape equipped you will receive twice as much Tokkul. A red skull will also appear above the champion, showing everyone who won the last game. 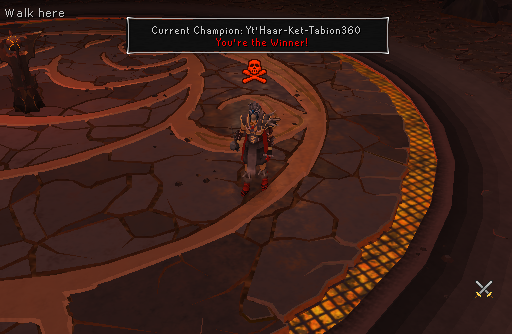 There is also a chance that you receive a a Hybrid armor robe (body) as a drop. This item will be dropped during the activity. The more games you have won the greater the chance of receiving this item as a drop. Each robe/body increases the amount of damage you can deal by 3%. When the whole set is worn, the amount of damage will increase by +15%.