0986
TokHaar Fight Kiln
Description:
The TokHaar Fight Kiln is a brutal new combat minigame that is extremely difficult to complete. Only the best adventurers can survive all 37 waves. This requires much more skill and patience than the TzHaar Fight Cave.

The Fight Kiln has 7 TokHaar-Jads throughout the 37 waves. It is recommended that adventurers seeking to complete this challenge and obtain the right to wear the TokHaar-Kal, should attain 90+ in all combat skills before attempting the Fight Kiln.
Skill Levels Required:
None.
Quests Required:
The Elder Kiln.
Items Needed:
A Fire cape (first time only).
Skill Levels Recommended:
85+ Defence
90+ Constitution
43+ Prayer (Having Soul Split is advised)
67+ Summoning (Pack Yak is advised)
96+ Herblore
Items Recommended:
See equipment section below.
Starting Point:
Inside TzHaar City, west of the entrance from the Musa Point Volcano.
Is this MiniGame Safe to play?:
Yes
Getting Started:

Make your way to the top of the Musa Point Volcano on Karamja and walk through the middle to the entrance of TzHaar City. The Fight Kiln itself can be found towards the north eastern area of the the city. There are various ways to reach the TzHaar City: 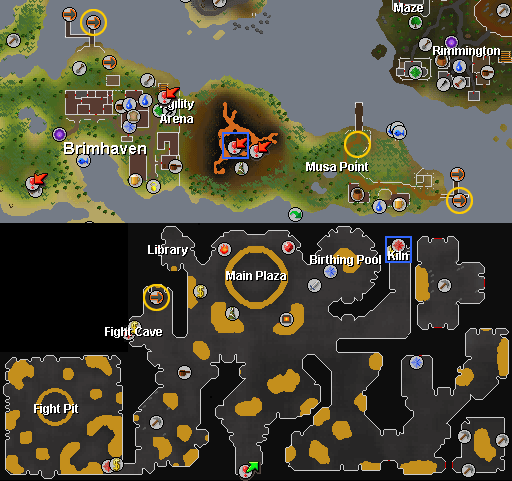 The best method of completing the Fight Kiln is through Mage, as many of the monsters can be caught behind obstacles which allow easy targets. This section is based for that setup.

Note: It is recommended to leave at least two free inventory spaces for picking up Constitution and Restoration crystals (see See Lava crystals section below for more information). 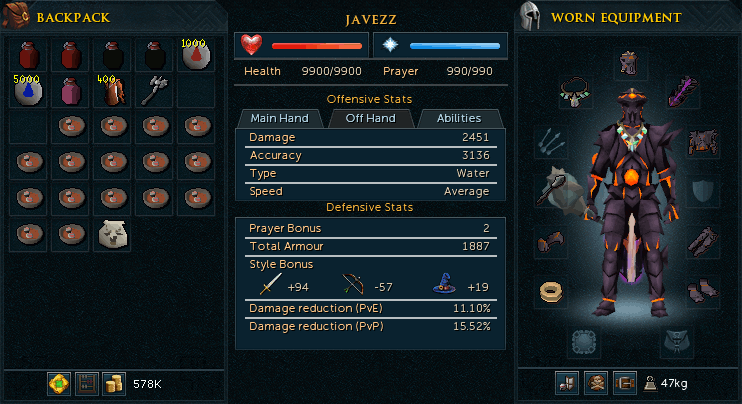 To be able to start this minigame, you must first sacrifice a Fire cape to TokHaar-Hok by allowing him to tear it apart. This is a one-time sacrifice and will grant you permanent access to the kiln. 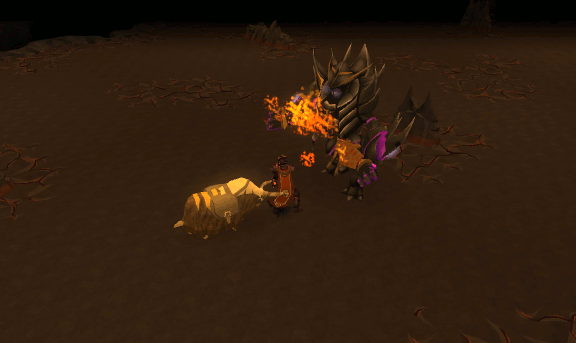 There are 10 different TokHaar of varying difficulty which you will face during the 37 waves of the kiln, ranging from the level 100 TokHaar-Hur to the level 800 Har-Aken.

After completing certain waves, a special lava crystal will spawn in next to the middle rock. These crystals act as power-ups in the kiln and can make the later waves much easier to complete. It is recommended to only pick up the Constitution, Restoration and Invulnerability crystals as the Ranged, Strength and Magic crystals are of little use and can be detrimental as they halve your Defence. Note that only one crystal can be activated at a time. 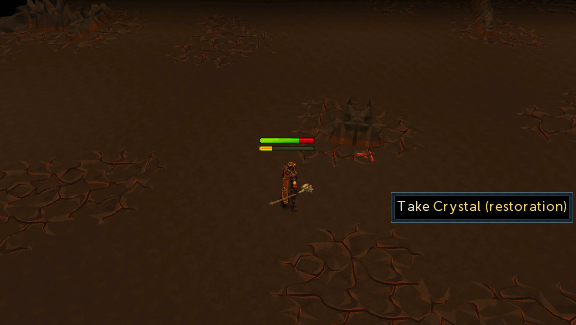 Wave 1 - 4
For these waves you want to position yourself in the curve of the L rock on the south side of the arena at the start of every wave (see image). When the wave starts, wait for the monsters to be lured towards you and they will all get trapped on the L-rock and another rock obstacle to the west, allowing you to deal with them one by one rather than being attacked all at once. 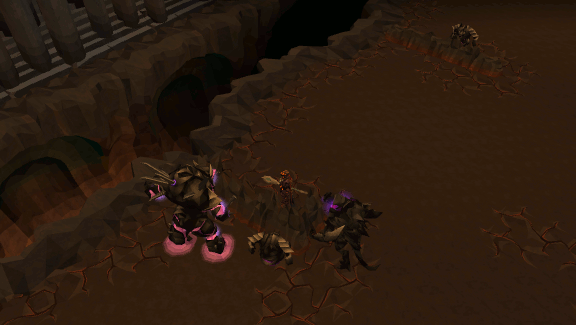 Wave 5
Wave 5 introduces the TokHaar-Ket-Dill and this is where you must be cautious. When the wave starts, stand at the L-rock and kill the other TokHaar. Once done, head north and look for the Ket-Dill which should be wandering around. If you have dreadnips, lure it towards the middle rock and stand on the opposite side to trap it and then spawn a dreadnip and start maging the dill (you won't deal any damage, but if you don't attack it, your dreadnip will disappear). Now just keep using dreadnips until the Dill is dead. 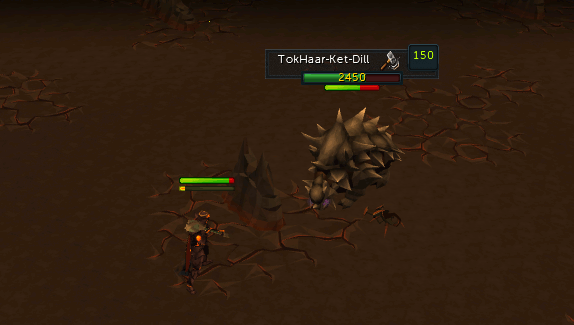 If you are using a pickaxe, DO NOT use protection prayers as they are ineffective and will cause the dill to constantly use a powerful special attack. It can take anywhere from 10-30 hits with your pick to break the armor, but after that it should be easy to finish it off. Just watch your health as they deal frequent heavy damage. You may want to try using a hit and run method to reduce the damage taken.

Wave 6-9
Return to the L-rock and kill the monsters in these waves as necessary.

Wave 10
As soon as you have cleared all monsters in Wave 9, position at the northeast corner of the rock in the middle of the area and wait for TokHaar-Jad and a TokHaar-Tok-Xil to spawn. They'll be lured towards you and get trapped on the rock, allowing you to step out and kill them individually. See below for more information on TokHaar-Jad.

Much like his counter part TzTok-Jad in the TzHaar Fight Caves, TokHaar-Jad also uses the full power of the combat triangle and is capable of killing you with a single hit. However, they can actually be much easier to defeat as there is no TokHaar equivalent of TzTok-Jad's healers, Yt-Hurkot and they have significantly less health.

The key to killing the TokHaar-Jads lies with the rock in the middle of the arena. With the exception of wave 35, the TokHaar-Jads spawn in either the southwest or southeast corner of the arena and with you stood on the northeast corner of the rock, they will be lured towards you and get stuck due to their size and they cannot attack you over it. From here, you can either kill Jad first or kill any other monsters and then Jad, but either way you won't have to worry about being attacked by other TokHaar while fighting Jad and just need to make sure you prayer switch correctly. 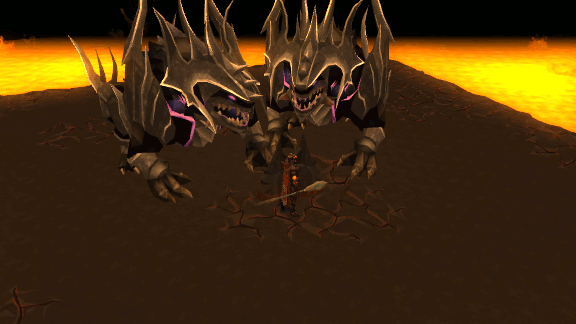 Since you must have killed TzTok-Jad in the Fight Cave to access the kiln, you should be familar with Jad's attack animations, but here is a recap. His movements will indicate whether he is going to range or mage and you must react EXTREMELY QUICKLY by switching to the correct protection Prayer before the attack launches:

Mage Attack: TokHaar-Jad stands on his hind legs for a few seconds and he looks like he is actually forming a fireballs to shoot you with it you gotta protect from magic before the ball is sent on your way.

Range attack: TokHaar-Jad stands on his hind legs and stomps down on his front legs, an actual effect looks more like a shockwave coming out of his front legs which once they show you should switch to range protect in order to not get hit by his ranged attack.

Here are the locations Where TokHaar-Jad will spawn for each wave:

Wave 11:
4 TokHaar-Mej will spawn this wave protect from mage and start killing them one by one, using some Dreadnips will speed up the process of this wave.

Wave 12:
2 TokHaar-Me and 2 TokHaar-Xil will spawn in this wave. Make sure you're standing at the L-shaped rock safe spot to the south of the arena and activate Protect from Missile prayer. Kill the Rangers first and then start killing the Mages after switching your prayer. You must avoid tanking all the Mages at once.

Wave 13-14:
These are easy and safe waves by protecting from mage during this waves you will be able to finish them easily as long as you avoid getting into Melee range.

Wave 15:
Stand north-east and protect from range a TakHaar-Xil will spawn north kill it then switch to mage protect and start killing the TokHaar-Ket-Zets that are standing south of you but always avoid melee distance from those.

Wave 18:
Protect from mage and kill the Tokhaar-Tok-Xil that will spawn north then start killing the TokHaar-Ket-Zek after finishing the ones in north the process goes the same as wave 17 for the ones left south.

Wave 21-23:
After completing Wave 20, the lava surrounding the arena will have risen to the point that it starts to close in and you will have lost the outer rock obstacles. However, there are still one or two which can be of use, especially the one in the northeast. These waves are fairly easy, just turn on protect from melee and kill the TokHaar that spawn.

Wave 24:
Stand north-east of the Safe Spot and protect from range start killing the TokHaar-Tok-Xil then quickly switch to melee protect and kill the rest.

Wave 29:
Put your melee protect on and kill them this should be done quickly.

Wave 30:
Stand north-East of the Safe Spot and protect from melee kill the monsters spawns north and pot-up/heal to face the 3rd TokHaar-Jad then simply follow the same step listed on Wave 10.

Wave 34:
Stand north-East of the Safe Spot and protect from range. Kill the TokHaar-Tok-Xil and pot-up again and get ready to fight TokHaar-Jad and simply repeat same instruction on wave 10.

Wave 36: (Double Jads)
Stand North-East again of the Safe Spot they should be trapped behind the Safe Spot, Pick them off one at a time using the same method as wave 10.

Wave 37: The final challenge
This is the final fight, Keep a clear head and follow the stratagy listed below and you will have your very own TokHaar-kal soon enough.

After completing wave 36, a cutscene will play in which TokHaar congratulates you on getting this far and then lets you know that there is one final challenge, defeating Har-Aken. 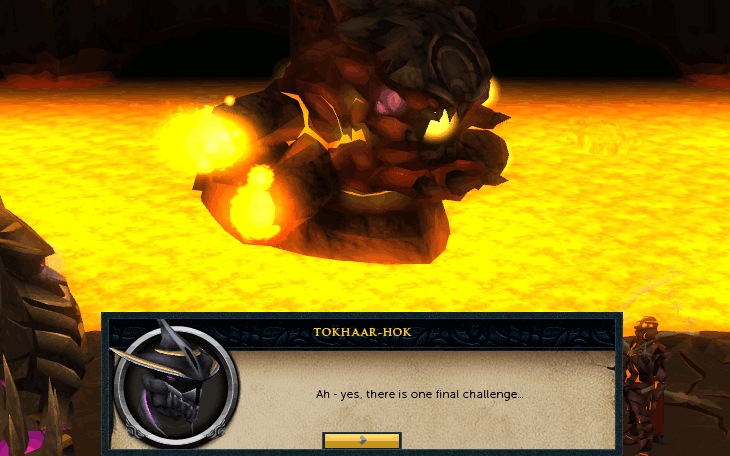 To kill Har-Aken, you must defeat the head which emerges from the lava for 27 seconds every 72 seconds. During the time that the head is submerged, it will attack you with its tentacles which use either Ranged or Mage from a distance or Melee up close.

If you have picked up and saved the Constitution crystals, then this fight will be significantly easier. When the wave starts, you can use one of these crystals to boost your Life points to a constant 15,000 meaning that you won't have to worry about taking damage or healing at all. The fight should take no longer than 10 minutes, so the three crystals should last more than long enough to kill Har-Aken.

As soon as the fight starts, you should run to the south side of the arena and watch for the head to emerge. It never appears on the north side so you can ignore that completely and watch the south, east and west. Build up your adrenaline on the Ranged and Magic tentacles while waiting for the head and once it appears, use a threshold or ultimate ability on it and then attack with as many basic abilities as you can before it submerges. Simply repeat this until the head is dead and a final cutscene will play, after which you can claim your reward.

After defeating Har-Aken, TokHaar-Hok will offer you the choice of an Uncut Onyx, or depending on which combat style you dealt the most damage with, a TokHaar-Kal-Mej (Magic), TokHaar-Kal-Ket (Melee), or TokHaar-Kal-Xil (Ranged).

The TokHaar-Kal capes are the second best capes in each combat class after the Completionist cape and so it is highly recommended to claim this the first time you complete the kiln and then the onyx after subsequent completions.