0959
The Great Orb Project
Description:
Ever wondered how runes are actually created when you turned essence into runes? In another dimension wizards have conducted a thorough investigation in the process of crafting runes. They have come to the point that none of them can agree on whether the green or yellow orbs are more important in the process. The ongoing dispute has lead to this team base mini-game.
Skill Levels Required:
50 Runecrafting
Quests Required:
Rune Mysteries
Skill Levels Recommended:
A high Runecrafting level.
Items Recommended:
An Explorer's ring and Runecrafing pouches.
Starting Point:
Speak to Wizard Acantha or Wizard Vief in the Runecrafting Guild.
Is this MiniGame Safe to play?:
Yes
Getting Started:

The Great Orb Project is a team game, consisting of a Yellow and a Green Team. To join a team, right click a team leader and select "Join". If this is your first time playing, you will be told the basics of the mini-game. If there is already another game taking place, you will not be able to join until it has finished. You will be told to go try the other team, when one of the teams is full. Once you have joined a team, you will be given 4 items to be used in the mini-game.

Wizard Acantha is the leader of the Green Team.

Wizard Vief is the leader of the Yellow Team.

When both teams are ready to start, proceed through the portal that appears on the northern edge of the room. The game has now started. If you do not go through the portal while you are on a team or exit during the game, you will have to wait 15 minutes until you can join another game. 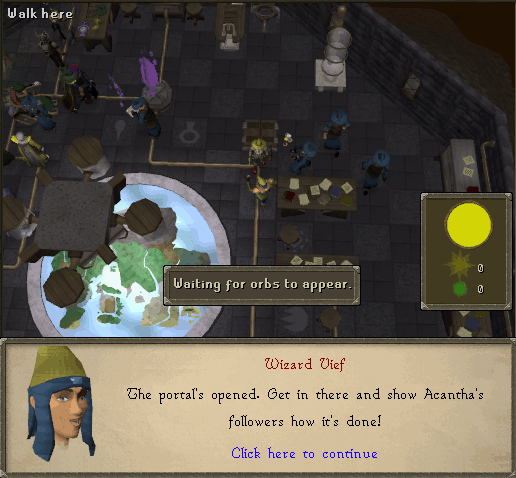 The Mini-game consists of 6 rounds for F2P and 8 for P2P, each lasting 2 minutes. The rounds take place at the following Runecrafting altars.

Once you have entered the portal, you will find yourself at the Air Altar. There will be green and yellow coloured orbs around the edge of the alter. 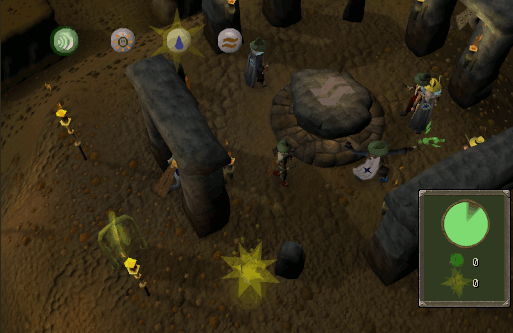 During the game, your interface will indicate you the following information about the game:

The aim of the game is to get as many of your colored orbs to the altar by using the given wands. The attractor-wand will pull orbs towards yourself, whilst the Repeller-wand will push them away. Use the Barrier Generator to create temporary barriers, which stop orbs from passing. One can destroy barriers by selecting their "Destroy"-option.
During the last 30 seconds of each round, you will not be able to use your wands on the orbs of your opponents. Once a round has ended a portal will appear, which will take you to the next altar. Between each round you have a short period of time at your disposal to use the randomly awarded essence to craft runes. When the final altar has been fought for, a portal will take you back to the Runecrafting Guild, where you will be granted your reward in the form of tokens.

The best strategy is switch between the Attractor and Repeller wands to get orbs past obstacles and towards the altar faster. An alternate way of using the same strategy is to have one team member using a Attractor, whilst the other one uses a Repeller. To pull orbs at a certain angle have team members pulling or pushing from different angles. Having several members pulling one orb will save you a fair amount of time.

To give the opposite team a hard time getting the orbs towards the altar you may your Repeller wand to push their orbs further away from the altar. Barriers can also be set up to prevent orbs from passing. It is best to place barriers in between the standing stones. Some teams tend to set up barriers near the edges of the arena, where the orbs respawn, to block them from being pulled towards the center of the arena. These barriers will, however, not stop orbs from moving when they are already being pushed or pulled.

Because orbs need to touch the altar in order to be counted in the score, it is advised to stand on the other side of the altar when pulling the orb. Otherwise, you might block the orb from touching the altar.

For each altar that a team wins, each player on that team receives 100 tokens with an additional 200 for the team that won the most altars overall. If both teams won the same number of altars overall, each player receives 25 additional tokens. Even if your team lost, you will be giving 10 tokens for the effort. Additionally, each player will be rewarded an extra amount of tokens based on the quality of their play, whether their team won the game or not.

These token can be used to claim the following items from the wizard Elriss.

After each round has ended, whether you lost or won it, you will be awarded a random number of essence (Rune for F2P, Pure for P2P). You can use this essence to craft runes in between rounds. Additionally you may buy more essence from Elriss, each for the price of 1 token.

Runecrafter robes yield you a bonus to your Runecrafting whilst playing The Great Orb Project mini-game. These clothes can be stored in the Costume Room of your Player Owned House).

Talisman staves are used in the creation of Runecrafting staves and the Omni-talisman staff. Both type of staves act as Runecrafting talismans/tiaras. They also make it easier to distract the eyes in the Abyss. To attach a talisman to the staff, simply the use the staff or talisman on the corresponding altar.

Note: The law staff has no combat bonuses, and can therefore be taken onto the island of Entrana. Staves which have not been assigned to an altar cannot be wielded.