0599
Tai Bwo Wannai Clean Up
Description:
Upon the completion of the Jungle Potion Quest, you will be able to find out that the Tai Bwo Wannai villagers are in need of a hand to fortify their defences as their wooden fence has rotten out! In this activity you will be required to make use of your Woodcutting skil knowledge to rebuild the fence and to help the villagers, and of course, in exchange of some awesome rewards!
Skill Levels Required:
At least 10 Woodcutting.
Quests Required:
Jungle Potion.
Items Needed:
Machete (of any kind), Food, Armor, Weapon, Antipoison potions, and Relicym's Balm.
Skill Levels Recommended:
At least 35 Woodcutting to have access to all the types of jungle available, and 16 Cooking for those who wish to cook Spiders on a stick.
Items Recommended:
Pickaxe, Spade, Prayer potions (unless you have completed the Tai Bwo Wannai Trio quest), Beast of Burden familiar, an Anti-poison totem, Gem bag, and Normal or Super Restore potions.
Starting Point:
Murcaily, found roaming in front of the Mahogany and Teak trees area.
Is this MiniGame Safe to play?:
Yes
Getting Started:

To get started with this activity, head towards Murcaily, found near the Mahogany and Teak tree area who will provide you some basic information about this activity: 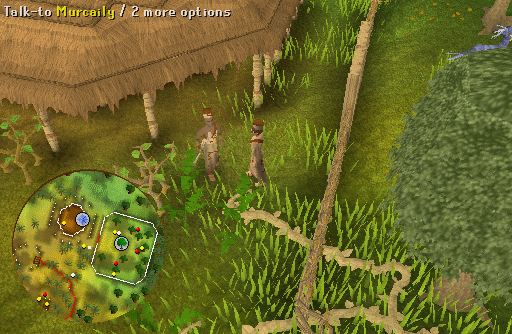 Once you've done this, you are ready to equip your machete and start doing some work around the village to gain favour!

There are three types of "jungles" that you can clear in order to obtain material to repair the village's fence: 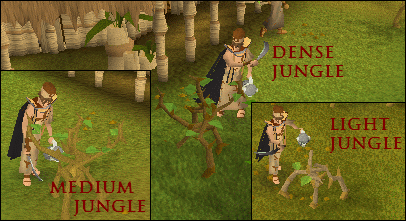 Your machete will be the most vital tool for you to use in this mini-game, without it, you simply can't do anything!
This is why it is a good idea to obtain a gem incrusted machete which grant faster jungle clearing speed, a must have if you plan to play the activity for a while:
In crecent order of speed, we have:

In a couple of words, there are two tasks to complete in order to progress in this activity.

The first one, is to collect the best kind of Thatch spars your woodcutting level allows you to obtain to repair the village fence. This is when a Beast of Burden might be handy: to store more spars for you! When you have collected enough, simply head to the crumbled village wooden barrier and start reparing it section by section. 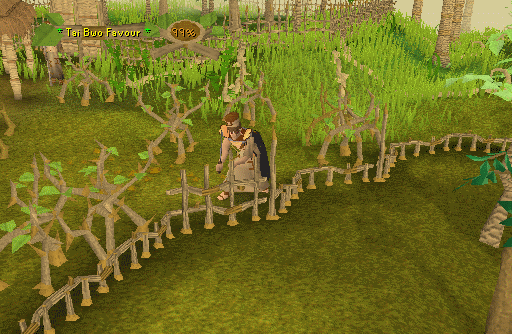 The second task, is to protect the village from the threats that occasionally spawn while clearing up jungles, such as...

You might stumble across a tribal grave and awaken one of these restless spirits, and they won't be happy!
These are probably the most powerful opponents you will find in this mini-game, and while you can defeat them fairly easily with the appropiate materials, they are not to be underestimated. They can bind you and at the same time drain your combat stats, this why having a couple of Restore potions with you is recommended. 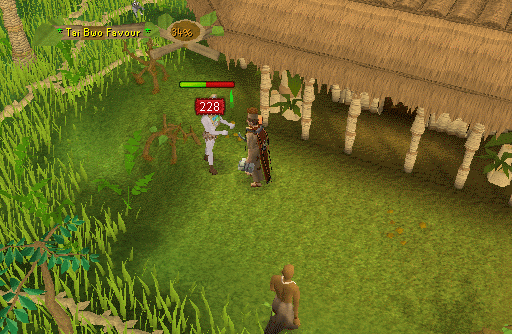 There are three types of Broodoo Victims you can encounter, and while they might look painfully slow to kill with a regular weapon, the secret to defeat them easily lies behind a couple of specific items! Each type of victim has a weakness for a certain consumable item, simply feed it to the victim to inflict critical damage on them.

As you might have guessed already, after you have defeated the victim, you'll be rewarded with the tribal mask that the victim was wearing. 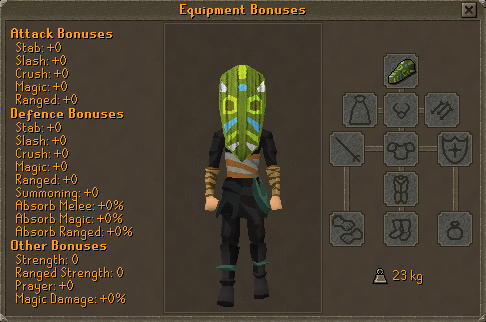 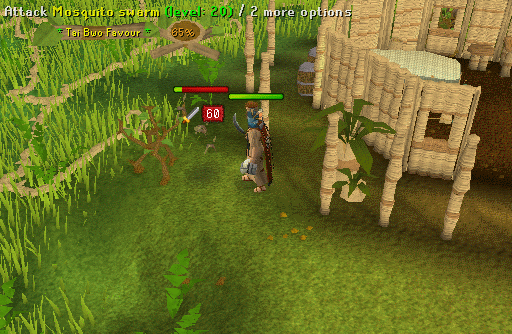 Once defeated you will be rewarded with favour, a small amount of agility xp, and a certain amount (subject to the amount of mosquitos killed) of proboscis. This peculiar drop is used during A Fairy Tale Part I - Growing Pains quest, and also used in the creation of Spirit mosquito pouches with the Summoning skill.

Sometimes you might discover an enemy tribesman hiding in the jungle! He won't thank you for blowing his cover, that's for sure. 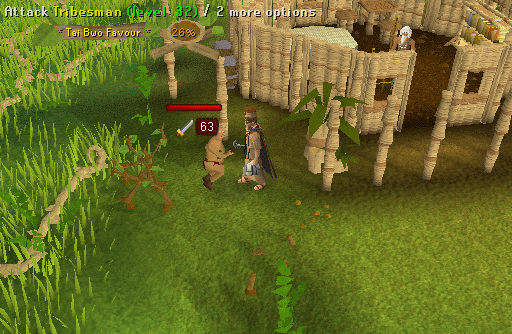 Although their combat level is relatively low, the danger of this encounter is not the tribesman itself, but the poisoned spear he uses! This nasty strong poison can deal up to 110 Lifepoints damage, so it could be potentially dangerous. This is were Antipoison potions or an Anti-poison totem becomes vital to optimize your chances of survival.

Although not very often, some sneaky snake might pop in to attempt an ambush! Just as the tribesmans, bush snakes can poison you, so be sure you have anti-poison mesures with you at times. 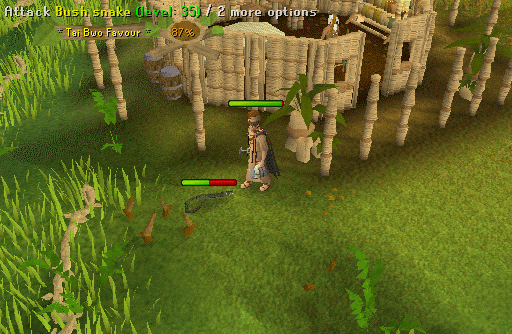 This challenge event is usually fancied by players as bush snakes will drop Snake skin used in the craft of Snakeskin armor, details of which can be found in the rewards section.

Aracnophobics beware, as a level 44 Jungle spider might as well come out of one of the jungles to engage a battle with you! 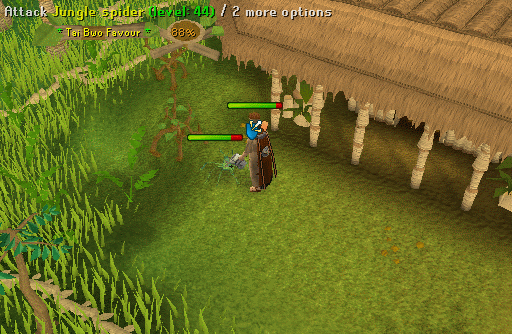 Once defeated, you will be able to collect its carcass which you can use along with a skewer to make a Spider on a Stick. If you have 16 Cooking or higher you will be able to attempt to cook this exotic dish to regain some lifepoints from the battle if you're low on food. Yum!

Now, you may have noticed that as you progress on your threat extermination and fence repairs, you will start gaining Tai Bwo Wannai favour. You can keep track of it using the counter found in the left corner at the top of the game screen:

Trading sticks, which is the local currency of this village, are obtained as a reward for all your work around the village. Cash your Tai Bwo Wannai village favor into Trading sticks by talking to most of the Villagers that you can find around: 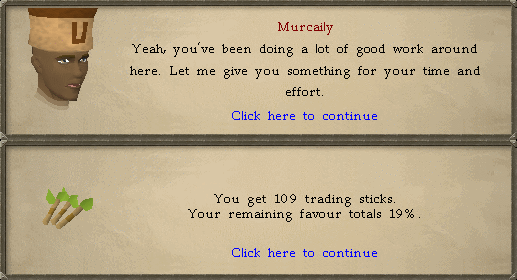 Here's a map of all the natives you can ask for Trading sticks within the village: 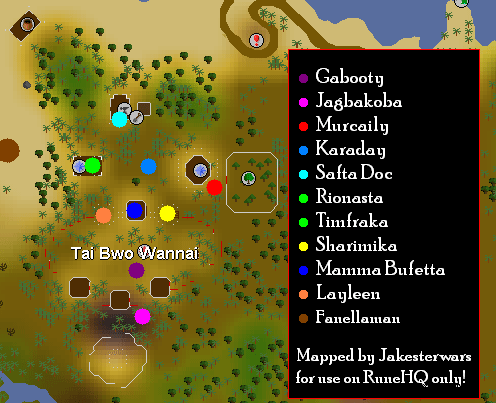 With these Trading sticks you'll be able to purchase some snazzy tribal garments or gnome beverages off Gabooty as well. Gabooty can be found roaming around the centre of the village: 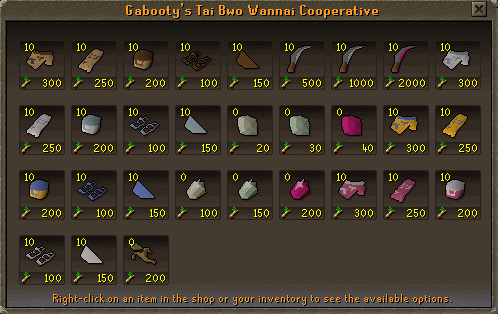 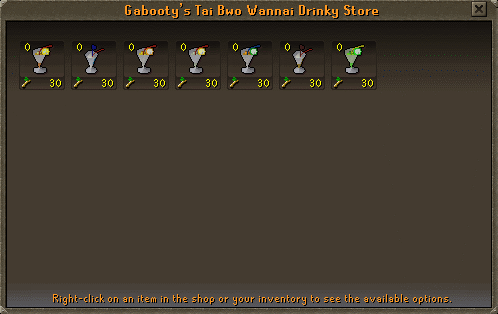 Tribal clothing is nothing more than decorative though: 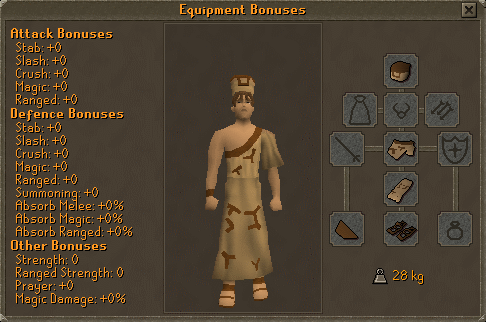 You can also pay 100 Trading Sticks (per time you enter the area) to gain access to the rare tree area, where you will be able to find a selection of Mahogany and Teak trees ready to be chopped down. Beware though, jungle snakes are to be found inside this enclosed area, and they can poison! 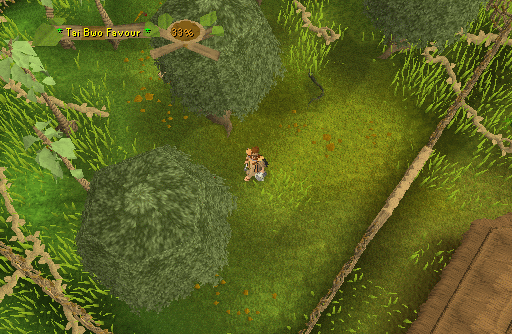 In case you forgot to bring your own hatchet, you will find two Iron hatchet respawns inside the area for you to use.

And it's not over yet! You can also bring your trading sticks along with some gems and Gout tuber to Safta Doc, who can craft gem incrusted machetes for you in exchange of the right amount of materials. 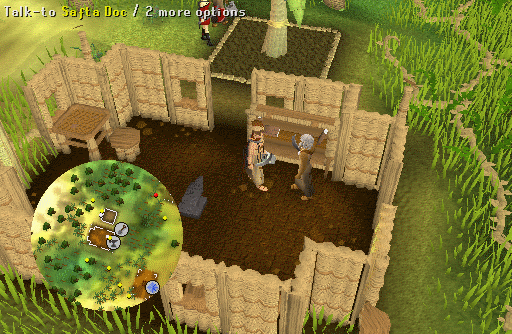 And last, but not least...you can pay Rionasta with Trading sticks for him to become your personal human bank deposit box! 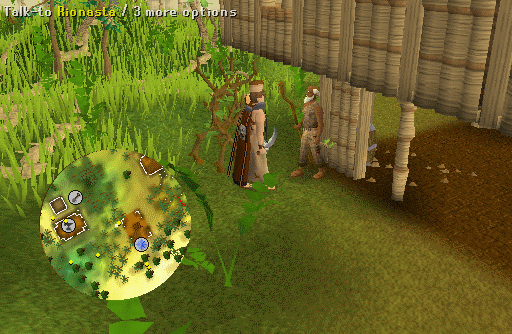 He will charge you 10 Trading sticks per item you wish to deposit.

And if any of the services that the Tai Bwo Wannai village offers you in exchange of Trading sticks are not appealing to you, do not worry, they are tradeable! So you can sell them directly to other players, and using the Grand Exchange.

As it was mentioned a while back in the guide, Bush snakes will drop their skin, which after being tanned can be used to craft snakeskin armor pieces, armor fancied by archers. Specially the boots! 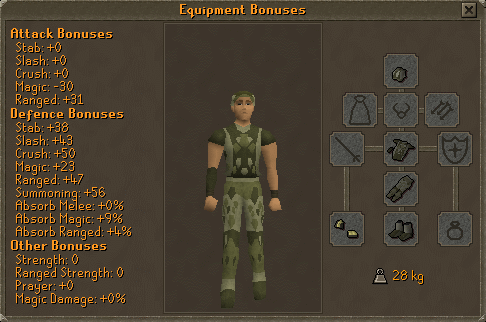 But unlike the dragon or cow hide armor, the snakeskin will require way more tanned skins to craft the armor: 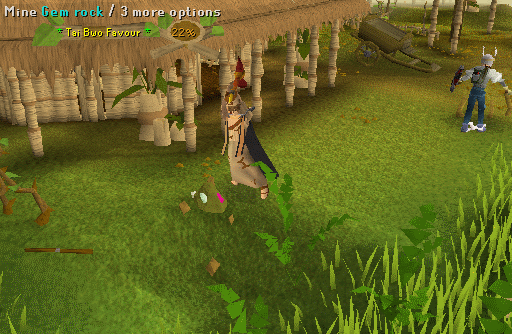 After you have fully cleared a jungle bush there's a chance of a gem rock to pop up, this is when having a pickaxe and a Gem bag in your inventory comes in handy. The gem bag will help you save some invetory space as you mine it in you get one of the four principal precious gems.

After you have fully cleared a jungle bush you have a slim chance of getting a gout tuber sprout to appear, note that this is what the spade is for (although we would simply recommend you have one stored with the Leprechaun near the Calquat tree patch).
This is probably the most fancied event above all in this activity, as the gout tuber because of its rareness can be sold at a very profitable price, or you can choose to plant it in a herb farming patch to grow goutweed herbs, or trade them along with other items to Safta Doc in exchange of gem-incrusted machetes.