0977
Soul Wars
Description:
This Mini-Game is very similar to Castle Wars, each game lasts 20 minutes and can be played on any world, although the themed worlds for the Miniame are currently 44 and 79. In Soul Wars, two teams compete against each other to gather Soul Fragments and offer them to the Soul Obelisk in order to defeat the opposing team's Avatar. This requires a combination of combat and Slayer skills. This is a safe mini-game, so feel free to bring your best equipment!
Skill Levels Required:
None.
Quests Required:
None.
Items Needed:
None.
Skill Levels Recommended:
A high Slayer level
A high Combat level
Items Recommended:
Your best Melee/Magic/Ranged combat equipment.
Starting Point:
Soul Wars arena is accessed through the yellow portal southwest of Edgeville Bank, west of Varrock. Talk to Nomad.
Is this MiniGame Safe to play?:
Yes
Getting Started: 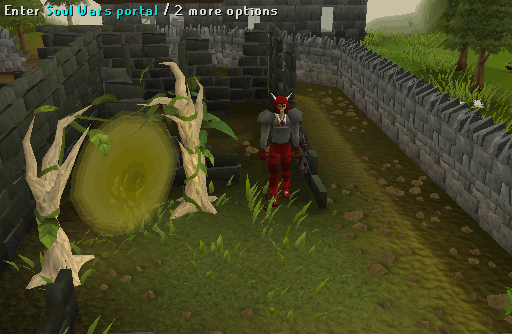 Soul Wars is a team-based game. Before joining a team, it is strongly recommend that you speak to Nomad, who will teach you about the game. There is a bank chest just north of Nomad should you need to change out your equipment or bank items. You will be fighting other players with any combat style, so bring appropriate equipment. 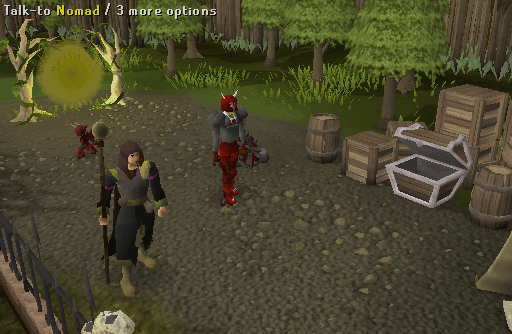 To join a team, enter either the red or blue team's waiting room. If you do not know which team to select, you may enter the green balancing portal in the center and you will automatically join one of the two teams. 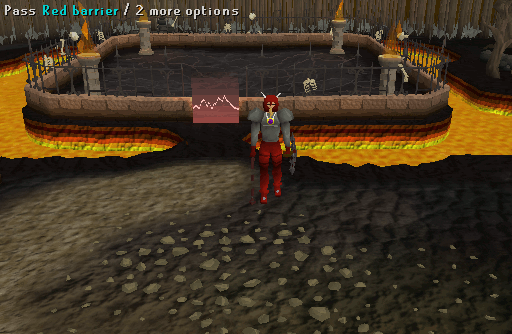 Soul Wars requires team cooperation, operating with different roles, to succeed as a whole. To play the game you can work on lowering the level of the enemy Avatar, keeping your Avatar alive, or trying to capture key points. If one role is lacking, the entire team will suffer. 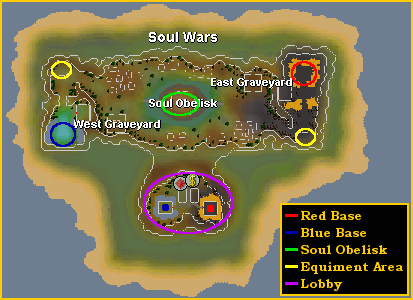 Once a game has started, you will appear near your team's Avatar. In the area next to it, you can find an equipment area where you can stock up on the following items, which will aid you in the game.

To win the game you must kill your opponents Avatar. Whether you are able depends on your Slayer level. The Avatar's level, shown in the top right menu equals the minimum Slayer level required to harm the Avatar. If you attack the Avatar, be sure to have plenty of Prayer Points for Protect from Melee, as it is level 525! (Red team: Avatar of Destruction, Blue team: Avatar of Creation). Prayer points can be replenished by burying Bones at a controlled graveyard.

To assist in killing the enemy Avatar, Pyrefiends (level 43) or Jellies (level 78) must be killed for Soul Fragments. Once you have a significant amount of fragments, go to the Soul Obelisk (if it is under your teams control) and use them on it to lower the level of your opponent's Avatar. Then, you can attack to the Avatar or gather more fragments. 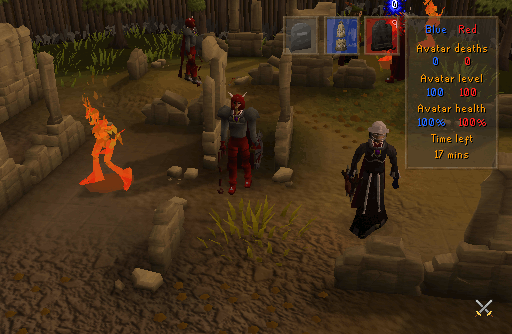 To keep your Avatar alive, merely kill anyone attacking it. You can pick up the Bones and go to a graveyard your team controls to bury them. The bones have a chance to restore the Slayer level needed to hurt your Avatar, effectively bringing its armor back up. 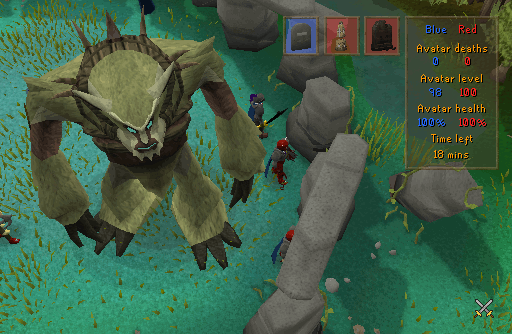 There are 3 areas that, when captured, will assist your team. The Western Graveyard is just east of the Red (Destruction) Team, the Eastern Graveyard is just east of Blue (Creation) Team. Stay there long enough without enemy players around, and your team will eventually control the area. When a team controls a graveyard, players who die close to it will respawn at that point. 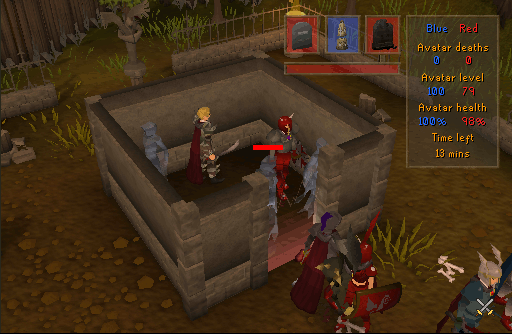 The Soul Obelisk, another capturing objective, has to be controlled in order to get the enemy team's Avatar slayer level requirement down, with the fragments mentioned above. 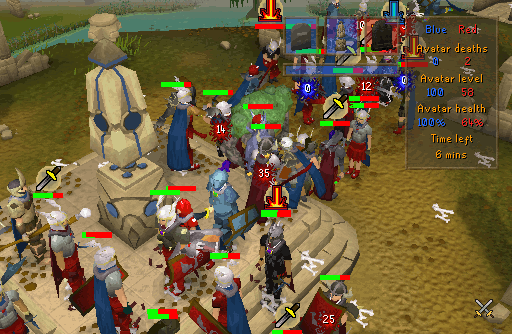 As Soul Wars requires all three of the above tasks, each equally important to win, it is best to evenly distribute roles. If your team is more successful in those tasks than the opposing team, victory is inevitable.

Use your Barricades wisely. It is advised to set barricades on bridges leading to the Obelisk and on the path leading to your team's Avatar.

To prevent from having to run back and forth between the gathering Soul fragments and the Obelisk, some people offer to act as a runner. Players give this person, who will run to the obelisk, all their fragments. Keep in mind, that this job is only suited for high leveled players.

Below you will find a list of equipment that we suggest to take into the game.

Note: When on a crowded world, we suggest taking a dragonhide set as you may encounter players using Ancient Magicks.

After a game has ended, you will receive 'zeal points' based on your performance within Soul Wars; 3 points for a victory, 2 for a draw, and 1 for a defeat. You can trade these in with Nomad for different rewards to suite your needs.

You can claim experience in one of the following skills. One zeal point is worth a set amount of experience depending on your level in that skill.

Charms of any color are available here, the amount of a certain color you can claim depends on your combat level. The cost for charms is successive according to rarity.

You may exchange any Slayer monster remains that you have obtained during your travels for a pet of the same type. Nomad will accept any stuffed or unstuffed remains.

This option will risk 2 Zeal points that you have acquired and will randomly give you an item for them in return. All items, if not stackable, will be received in the form of notes.