0993
Player-Owned Ports
Description:
Player-Owned Ports place you in control of your very own port and ships which can be sent on voyages to explore and map the Wushanko Isles, an archipelago that makes up the western edge of the fabled Eastern Lands, as well as play through the stories of 9 different adventurers and their own exploration experiences.

As you progress through the isles, you may come across pieces of forgotten scrolls which, once completed, can be used to create the strongest tank-class armor sets available in the game and unique items known as scrimshaws which provide special skill bonuses.
Skill Levels Required:
Level 90 in at least one of the following skills:
Agility
Construction
Cooking
Divination
Dungeoneering
Fishing
Herblore
Hunter
Runecrafting
Prayer
Thieving
Slayer
Quests Required:
None.
Items Needed:
None.
Skill Levels Recommended:
None.
Items Recommended:
None.
Starting Point:
Port Portal in Port Sarim, next to the Warhammer Shop.

Once you have your Captain's Log, you can use its teleport option to teleport straight to the portal.
Is this MiniGame Safe to play?:
Yes
Getting Started:

Starting Up Your Port:

If you meet at least one of the required skills, you can talk to The Partner inside the port to guide you through the tutorial and get your first ship.

If you don't have any of the required skill levels, then you can still participate in the port by talking to Meg. She will ask you a series of questions about adventuring and you must choose what you think is the best advice to help her succeed.

Meg returns from her adventure at 00:00GMT every Wednesday, after which you can collect an experience lamp for a random port-related skill and money reward. Once you've collected your reward, you can send her on another adventure until the next Wednesday.

Note: The money awarded and experience lamp size depend upon how well successful Meg's adventure was.

Once you have completed the tutorial and own your first ship, you can talk to The Navigator in the port office to learn how to send it out on a voyage.

Voyages have various requirements and can take anywhere from 20 minutes to over 15 hours to complete depending on the current region of the Wushanko Isles you're exploring. More information on Voyages can be found further on in this guide.

Although you only start with one ship, you can have a total of four and additional ships are unlocked by upgrading the office. It is recommended to obtain all four ships as soon as possible to increase the number of voyages you can send each day. 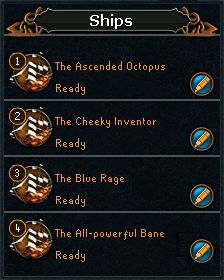 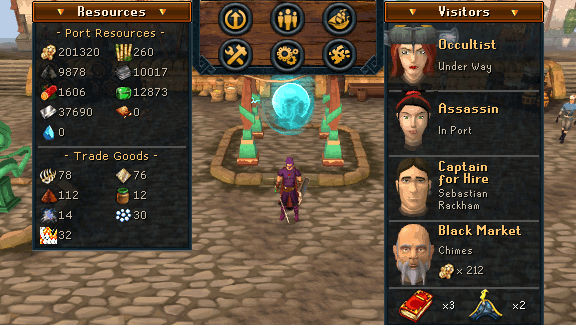 At the top of your screen, you will see your resources, your visitors and six icons in the middle. These icons are:

As mentioned above, every successful voyage will return with a number of resources. These resources are used to improve all aspects of your port and the various resource costs of upgrades and crew members are outlined in the tables below.

When you first start managing your port you will only have access to Bamboo and Chimes, but as you progress through the Wushanko Isles and discover new regions, you will unlock more resources. Each region has a unique resource and these are:

Upgrading buildings is a key part of managing your own port. Doing so will allow you to attract better crew, captains and adventures, improve the stats of your ship, increase your voyage rewards and make some of the best armor sets available in the game.

Each of your ships has 5 slots you can customize: Rams/Figureheads, Deck items 1, Deck items 2, Hulls, and Rudders. With the exception of rudders which only reduce voyage time, each of these increases the stats of your ship and therefore the success chance of your voyage. While it is fairly easy to reach 100% chance of success when just one stat is required, some voyages will require a combination of Seafaring, Moral and Combat and you will have to carefully customize your ship to find the best setup with the highest chance of success. 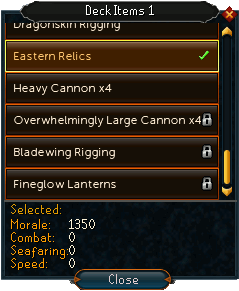 Note that Deck item 1 and Deck item 2 use the same unlock list. You only have to buy an item one time to use it in the two slots.

You can recruit and upgrade your crew via the Crew Roster interface. 15 crew members are available to recruit each day, but only 3 are displayed at a time. When you hire or reroll a crew member, one of the remaining reserve will take their place. Each ship can be assigned 5 crew members and each one will effect the stats and success chance of the voyage depending on their individual stats. As you progress through the regions, new crew with higher stats will become available (see below) and each region has a special crew member unlocked by the successful completion of a unique voyage. 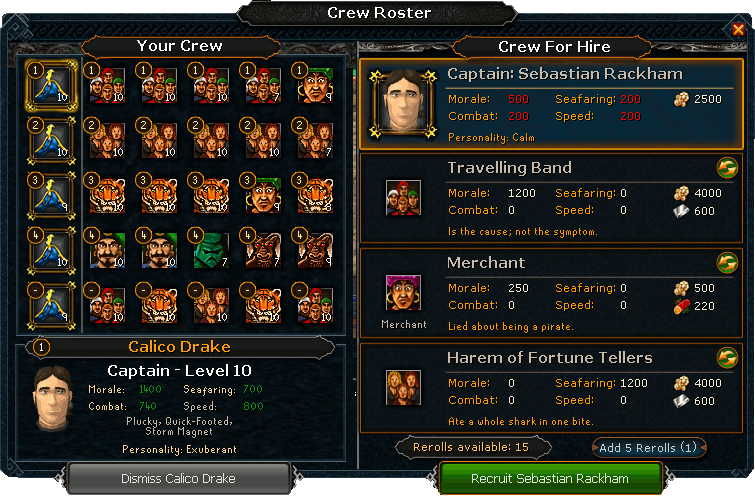 The main activity in your port is sending out ships to gather resources. These trips are known as Voyages. For each voyage you need one or more of the following stats: Morale, Combat, and Seafaring.

You can upgrade your stats by upgrading certain buildings in your port, upgrading the items on your ship, and hiring better crew.

Crew members have a color around their picture. Green stands for Morale, Red for Combat, and Blue for Seafaring. Certain crew members have other colors. They have multiple stats.

The fourth stat, Speed, doesn't increase your chance of completing missions, but it does decrease the time of your voyages.

There are two kinds of voyage: Standard voyages and Special voyages.
Standard ones can be played by anyone, but the Special voyages require an adventurer to visit your port. When you have one of the required stats, the corresponding adventurer might show up.

Standard voyages are the source of the majority of your port resources. They are generally shorter and easier to successfully complete than Special voyages, but offer a smaller reward. By completing these voyages you can receive resources, trade goods and special crew members.

Each day you will receive 15 Standard voyages, of which only three are displayed at a time. When you send one voyage, it is replaced by another from the queue. You also have the option to reroll a voyage if you don't want to attempt it and this will again replace it with a voyage from the queue.

Each day you have a chance of attracting an adventurer to your port. The adventurers are related to each of the required skills and will only be accessible if you have level 90 in the corresponding skill:

These adventurers offer three kinds of missions: resource missions, story missions and scroll missions.
The resource missions are basically the same of standard missions, but they have much better rewards.
Story missions let you continue through the storyline of that adventurer. There are no rewards for this.
Scroll missions offer eastern scroll pieces as reward. These are used for the real rewards of the Player-Owned-Port

Note: You can only do one mission per adventurer each day. So plan carefully.

After completing a voyage, you may receive a chatbox message regarding two distractions that are available to participate in while in your port. For completing these you will receive rerolls for voyages, captains and adventurers and effects that boost the stats of your ship for one voyage (with the exception of the Lifeboat which is permanent). The two distractions are:

After receiving the message "The Barmaid had a tricky time while the Ship was away. Speak to her to relive the events", head over the bar and talk to Surula to play Last Orders. The aim of this distraction is to serve all 20 bar patrons in under 10 minutes. This is done by clicking on the bar to collect two beers and then clicking on the people inside, outside and upstairs in the bar to serve them a beer. Surula can only hold two beers at a time, so you'll need to restock after serving two people.

After receiving the message "The Black Marketeer had a little trouble with some assassins. Speak to him to relive the event", head over to Felix and talk to him to play A Simple Favour. The aim of this distraction is to locate the 5 Death lotus assassins hiding in barrels around the port and use their clues to locate their assassination targets.

Once it starts, look for barrels with no lid and the assassin curled up inside, then click on it to talk to them. They'll give you a clue as to who they're looking for, generally the color of a piece of their clothing or gender and you must click on the people wandering around the port area who match this description.

There are generally several who match the clue and it may take several attempts to locate the correct one, after which the assassin will appear and kill them. Repeat this process 5 times to complete the distraction.

After receiving the message: "Seasinger Umi had a small issue when helping out around port. Speak to her to relive the event", head over to Umi, located just east of the portal, and talk to her to play Helping Hand. The aim of this distraction is to help the Warehouse Worker find the items on their list. Start by talking to the Warehouse Worker to receive a clue, then search the crates and barrels to find the appropriate item. You must find 3 items.

You can find scrolls by completing a special voyage with a scroll as a reward. There are 4 scrolls for each item and you need to collect all 4 to unlock the ability to make the item. You can specify which item's scrolls you wish to find in the port management interface. 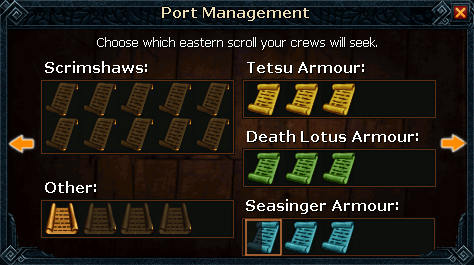 To make the items you unlock, you need trade goods. These are received as rewards from both special and normal voyages and do not necessarily coincide with whatever scroll you are searching for. Note that you only get trade goods from the Hook region and up.

Each category has specific trade goods:

As you progress through the Wushanko Isles and upgrade your port, your total port score (viewable in the Captain's Log) will steadily increase. When you reach certain score milestones, your rank will also increase which then unlocks the equivalent player title. There are a total of seven titles to unlock:

Factors that contribute to your total port score are: