0702
Pest Control
Description:
The Void Knights are a military order who have helped serve Guthix and his penchant for balance since the early Fourth Age. It is their job to ensure that the flux of good and evil coming through to RuneScape each day remains constant, but there are some beasts they find more difficult to accept than others.
On a series of islands in the far south of the world they have found some portals that are nothing but pure evil, which must be shut down at any cost.
Skill Levels Required:
50+ Combat for Novice boat
100+ Combat for Intermediate boat
150+ Combat for Veteran boat
Quests Required:
None.
Items Needed:
None.
Skill Levels Recommended:
None.
Items Recommended:
Melee and Ranged equiment.
Starting Point:
Void Knight Outpost
Is this MiniGame Safe to play?:
Yes
Getting Started:

The official worlds for Pest Control are 69 (P2P).

When you enter the city, head south and cross the gangplank. You will now be in the landing boat waiting area. You will depart after 5 minutes after the last departure or when you have 25 people in the boat at once. 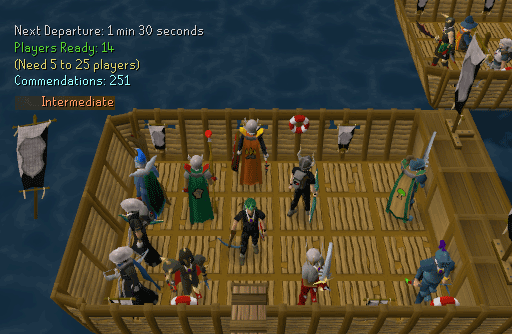 As soon as a game has started a couple of icons will appear in the upper left and right corner of your screen. The squiggly line inside a box shows the Void Knights health, the sword shows the total amount of damage that you have dealt, and the minutes show how long is left in the game.

In the upper right corner a number of icons will appear showing the health and of location of the portals. It will also inform you whether the shield protecting a portal is enabled or disabled.

The point of this mini-game is to destroy all the portals before the Void Knight in the middle is killed. There are 4 portals total, each weak against a certain attack style. Whenever a portal is destroyed, the Void Knight will heal 5000 Life points.

Blue Portal: East of the camp, weak against Bolts. 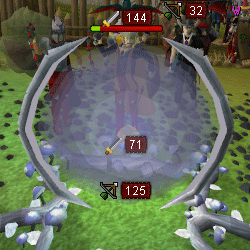 Purple Portal: West of the camp. 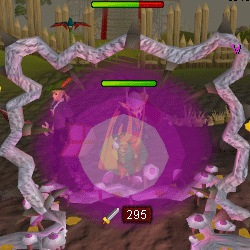 Yellow Portal: South-East of the camp, weak against Smash attacks. 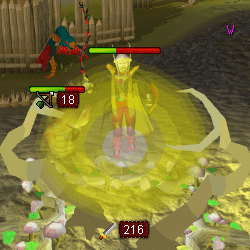 Red Portal: South-West of the camp, weak against Arrows. 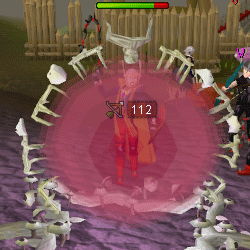 This may sound easy, but there are a lot of monsters invading the island, eager to kill the Void Knight. All of the monsters can teleport, not just the shifters! Your attack style does not affect the type of monster appearing. When a monster cannot be walked through, this also means you cannot range or use a halberd over them.

Once the boat arrives on the monster-infested island, you have 2 options:

When going through the gates, make sure you close them. Otherwise, the creatures can easily enter and swarm the Void Knight to death. When you attack the portals, monsters will attack you to try and defend them. The monster that you have to worry about the most is the Spinner. It has the ability to heal the portals' health very fast, so when one appears, make sure you kill it quickly.When you attack the portal from behind, the creatures (except for shifters who will teleport next to you) can't attack you, though you should go attack a spinner when it appears.

Portals have a fair amount of hitpoints, but are easy to destroy with a large group of people. The portals have indestructible magic shields protecting them when you start out the game. However, after a short amount of time, one of the shields will break down and the portal will become vulnerable to attacks. After a little while longer, another will become vulnerable, then another, then another. The order that they become vulnerable is completely random each game. It is very useful to split into two or three groups. One or two groups should go attack portals, and the other should stay and protect the Void Knight. If you have brought along a team that you gathered yourself, place jobs for each person, or stick them with groups.

If you decide that you don't want to attack the portals, you may also try to defend the Void Knight. He/she has a decent amount of hit points, but if no one defends him/her or the gates, they will be dead in minutes. A good way of defending them is to attack the Shifters that appear by the Void Knight first. After that you may want to go through the gate and kill some Torchers and Defilers, since there are a lot of these and they can deal a lot of damage to the Void Knight over the gates. There are four towers located at the walls. You can climb one of the ladders and use them to attack creatures on the ground from there. Shifters can still teleport up the towers, so watch out! It is highly recommended to mage or range at one of the two towers near the southern gate, as that one is most heavily attacked. Using Ancient Magicks at these really helps to protect the Void Knight and gives great magic experience.

Another way to defend the Void Knight is to chop down nearby trees and then use them to repair the broken gates. This requires a hammer and an axe. Kill any Ravagers to prevent them from destroying the gates again.

Rewards:
When all the portals are destroyed, you will get a coin reward depending on your combat level along with Void Commendation points, 2 in the Novice boat, 3 in the Intermediate boat, and 4 in the Veteran boat. If you fail to destroy the portals before the Void Knight is killed, you will not receive any rewards. The amount of coins you will receive is determined multiplying the number of your combat level by 10. A person with combat level 108 would receive 1080 coins per win. If you work hard enough and collect 100 points and cash them in all at once using the 100 pt option, you will receive an extra 10% experience. You can also use the 10 pt option to get a 1% experience bonus.

With these points you can buy a variety of different items. The full list is shown in the image below. In order to get the reward you need to deal at least 5000 points of damage. Even if your team wins, but you haven't dealt enough damage, you will not receive any rewards. When you have 500 commendations, you won't get anymore from playing the game until you trade them in for experience.

Note: To buy the armor, the mace, or the helms you need 42 in Attack, Strength, Defence, Constitution, Ranged and Magic, as well as having 22 Prayer or more. While playing Pest Control, you have a chance to obtain boots from the three Hybrid armour sets. 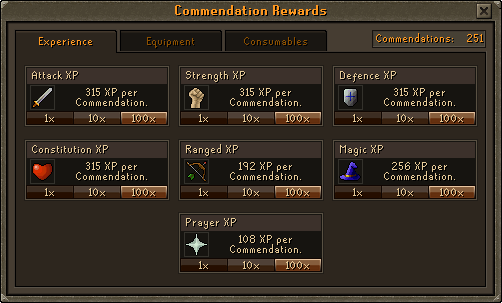 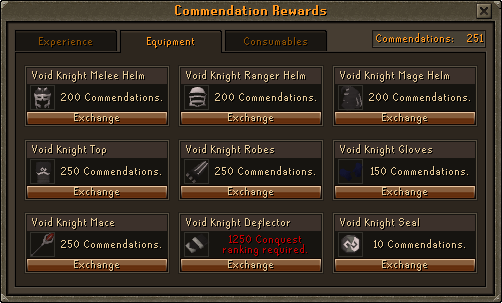 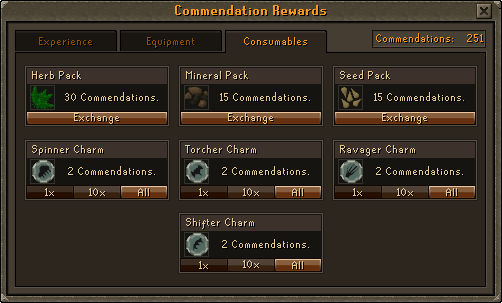