0995
Heist
Description:
Heist is a game of cat and mouse. You either play as the Robbers, who must collect as much loot as possible, or the Guards, who must stop the Robbers before they steal all of the loot.
Skill Levels Required:
None.
Quests Required:
None.
Items Needed:
None.
Skill Levels Recommended:
None.
Items Recommended:
None.
Starting Point:
Climb the ladder hanging from the sky northwest of Falador to enter the Heist waiting room.
Is this MiniGame Safe to play?:
Yes
Getting Started:

Heist takes place on randomly generated maps whose themes are based on several RuneScape cities and voted for by the players before each game. To actually join a game, you'll need to access the waiting room which is found on a platform flying high above Falador.

To reach it, you'll need to climb the ladder found just off the path to Taverley. When you attempt to climb, you'll be given three options: You can either join the public waiting room, set up your own private game (requires a minimum of 4 players), or join an existing private game. 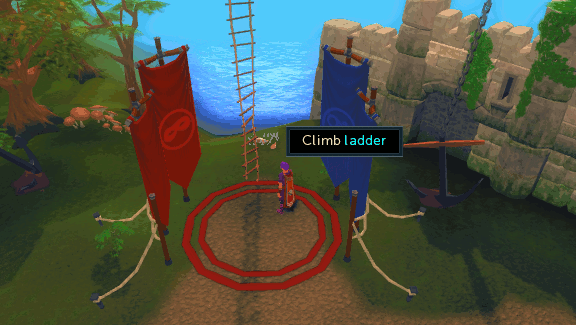 Welcome to the Heist waiting room. Here you'll find Liara, the leader of the Robbers and Sir Vyvin, the leader of the Guards. You can talk to either to find out some basic information about this minigame, play through a short tutorial or access the rewards menu.

First things first, no items can be taken into Heist, so you'll want to store them in the bank chest found here. Next, you must pick a side. If you want to try your luck at being a Robber, then head on over to the red ship on the north side of the waiting area. If you fancy being a Guard, then make your way to the blue ship on the south side. If you'd prefer to pick at random, then you can pass through the neutral barrier in the center of the waiting room to be assigned to either team. 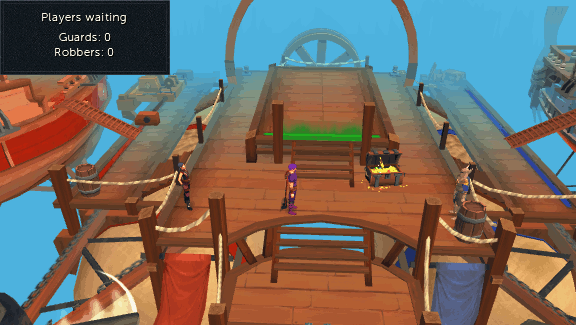 Once a sufficient number of players are on each side, you'll be given the option to vote on the location of the next game. When ready, the game will begin.

The aim of Heist is fairly straightforward. If you're a Robber, you now how 20 minutes to find and loot all of the Treasure chests around the map and deposit it without being caught by a Guard. The majority of these chests are found in the bank, but you may also find some in other buildings, on both the first and second floors.

If you're a Guard, your goal is simply to guard the chests and arrest the Robbers to convert them to your team before they steal all of the loot.

There are a number of ways in which Robbers can fool the Guards to successfully loot the map and avoid being arrested.

You can click on any NPC wandering around the map to take their form and disguise yourself. By then acting like a citizen, you can blend in and make your way to the Treasure chests without being easily spotted. However, there are a couple of situations that prevent you from doing so:

On some maps will find benches and haystacks scattered across the map. You can use these to blend in and hide out of plain sight of a Guard. However, Guards can investigate these and stun you, making it easy for them to arrest you.

If you feel lucky and want to risk it, you can attempt to pickpocket a Guard and steal a Jail key. This key can then be used to either free an imprisoned member of your team or yourself if you are arrested.

There are a number of Perks which can be purchased from the rewards shop to give yourself an advantage when playing as a Robber. These are:

Guards also have access to a selection of abilities to help them spot and catch the Robbers before they can reach the loot.

You can accuse any NPC on the island of being a Robber. If you've correctly identified one, then you'll trigger the evasion timer and reduce their run energy, which allows you to give chase and try to catch them. However, if you incorrectly accuse three citizens in a row, you will be jailed for 30 seconds or you can be freed by another Guard sooner.

Guards have the ability climb and hide in trees on some maps, allowing you to observe the area for any suspicious behaviour. If you spot a potential Robber, you can then just climb down and accuse them.

In the jail's equipment chest you'll find five viewing orbs. These can be deployed anywhere on the map and then remotely viewed from the jail, allowing you to monitor these five locations simultaneously.

Guards have their own set of perks which can be used to make their job easier. These are:

The starting point of the Robbers aboard their ship is also the main deposit point for any loot they've managed to steal.

Each map has a bank building which is where the majority of the Treasure chests are stored. If you're a Robber, you'll need to make it into this building and manage to loot it without being caught, which is no easy feat.

If you're a Guard, you'll need to be on the lookout for suspicious behaviour and arrest the Robbers before they can clear out all of the loot.

If a Robber is arrested twice, they will find themselves locked in jail. They then have a minute to escape (if they possess a jail key or Great Escape perk), otherwise they will be converted to a Guard.

The jail has a couple of useful features for Guards to use. The viewing station can be used to view the area around any placed viewing orbs, the equipment chest contains the viewing orbs mentioned previously, vaccines for curing zombie infections (only five can be taken at once), and finally the noticeboard which can be viewed by those have activated the Wanted Board perk.

Each map has five random events that both Guards and Robbers can take part in. The first team to complete them receives a reward - Robbers are given an extra loot bag and Guards are shown a trail to a random Robber lasting 10 seconds. Both are also awarded a random perk.

Several maps have special gameplay features which can be used to your advantage.

For every minute that the game lasts, every member of both teams are awarded 1 Reward point. In addition, the members of the winning team are also awarded 1 Win point. Win points can be converted into 5 reward points. These reward points can then be used to purchase rewards from either Liara or Sir Vyvin.

Note: If the game lasts for under 5 minutes, then no Win point is awarded, however you will still receive a reward point for each minute it did last. 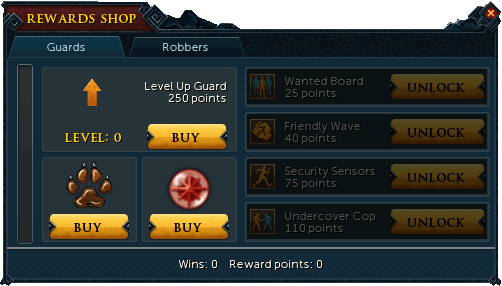 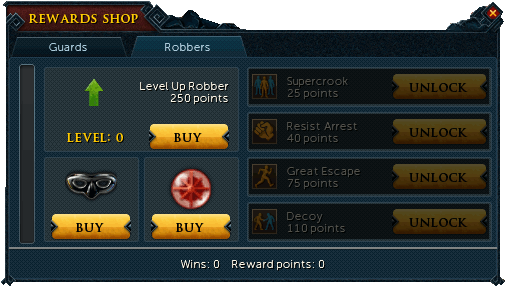