0210
Gnome Ball
Description:
Gnome Ball is a fun and easy game to help you increase your Agility and Ranged levels.
Items Needed:
Main hand must be empty to play.
Skill Levels Recommended:
20+ Agility
20+ Ranged
Items Recommended:
Food if you are very low health.
Starting Point:
Gnome Ball Arena, North West corner of the Tree Gnome Stronghold.
Is this MiniGame Safe to play?:
No
Getting Started:

Below we see the Gnome Ball arena. The Gnome ball referee can be found on the Western side, near the entrance gate. The main section of the field has 2 Gnome wingers that wander the Western half of the field. There are also 14 Gnome ballers wearing yellow, orange, and red uniforms. The goal is found to the far East of the arena.

To start, talk to the Gnome ball referee and he will ask if you want to hear the rules again. Tell him yes or that you just want to play and he will throw a Gnomeball up into the air, which you will automatically catch. 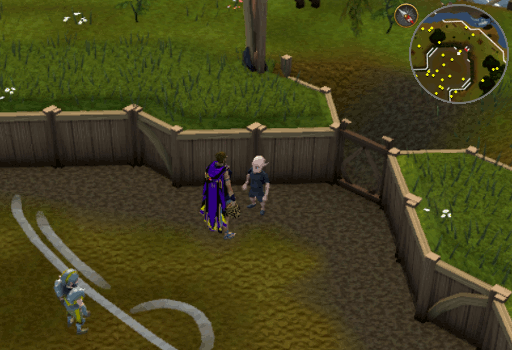 The point of Gnome Ball is to make it from the West side of the arena to the East side and shoot a Gnomeball into the goal. Once you have made a goal, the Cheerleaders along the Northern wall will announce that you made a goal, your score will increase, and you will earn a few experience points (see rewards). After you have made 5 goals, you will have won the game and can obtain a Gnomeball from the referee. 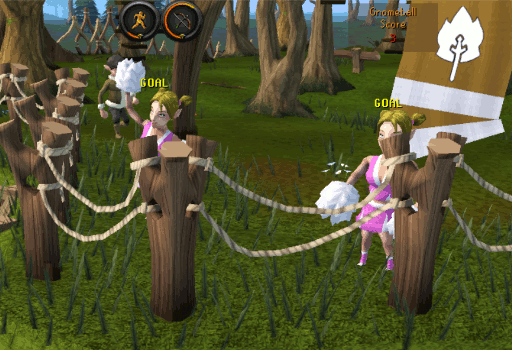 There are 2 ways to play the game: Hogging or Passing.

When you get the ball, take a route down the field that is least crowded with Gnome ballers - note that you CAN surge. If you get tackled, one of two things will occur: they will fail and fall to the ground or they will succeed and you will take a small amount of damage (typically about 30-50 health) as well as loose the Gnomeball to them. They will then wander around the field with the ball under their arm, simply click on them to tackle them. This will cause you to pick them up and attempt to grab the ball back. Note that you can fail to retrieve the ball and may have to try again. 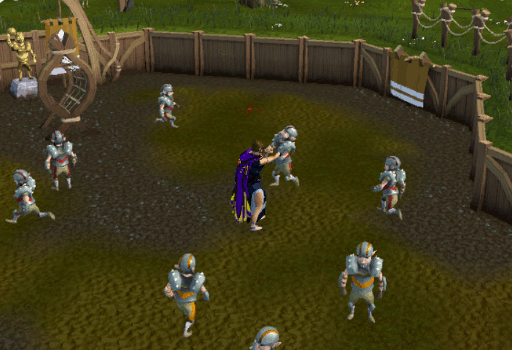 Once you have the ball again, continue down the course toward the net. When you get close enough, click on the net to take a shot. If you miss, go back to the referee and try again. Otherwise, you'll get a message saying that you've scored and the Cheerleaders will cheer for you. Give yourself a pat on the back and go back to talk to the referee to get a ball for the next round.

If you have level 90+ Ranged, you can simply click the goal once you have received the Gnomeball. This will cause you to run down the field and take a shot once you are close enough.

When you get the ball, look for the Gnome winger on either the North or South side of the arena near the entrance - they will be dressed in a green uniform. Click on either one and you will toss them the Gnomeball. They will then hold it for approximately 7 seconds before throwing it to you; use this time to run across the field toward the goal. 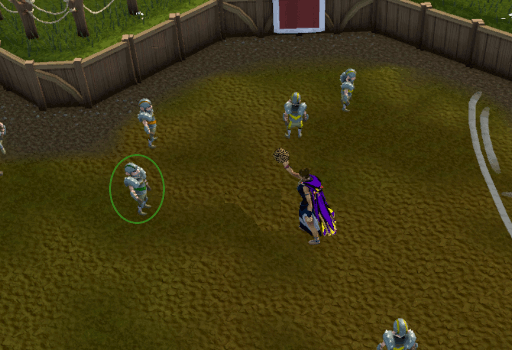 If you are tackled before you pass the ball, look for the Gnome baller wandering around with it under their arm and tackle them then throw the Gnomeball to a Gnome winger. Note that the Gnome winger can also get tackled. If this occurs, you will need to obtain a new Gnomeball from the referee.

When you receive the ball, quickly get close to the net and click the goal to shoot. If you miss, go back to the referee and try again. Otherwise, you'll get a message saying that you've scored and the Cheerleaders will cheer for you. Give yourself a pat on the back and go back to talk to the referee to get a ball for the next round.

A few other notable facts about Gnome Ball include:

If you are collecting Gnomeballs for any reason, such as for the From Across the Keramos achievement, you can do this quickly by walking to the gate (make sure you do not actually leave the arena or you will need to start over). This will end the game and remove the Gnomeball from your equipment. You will need to speak to the Gnome ball referee to obtain another. This one can then be unequipped and either used with Magic notepaper or dropped so that you can speak to the referee to get another. Note that you will need to listen to the rules again when obtaining your second, or more, Gnomeball. Be sure to grab 1 more than you want to have as one will be taken from you as you leave. Do not re-enter the arena with any Gnomeballs you have obtained this way as they will disappear upon entry.

Alternatively, you can collect Gnomeballs by playing the game and scoring 5 goals as it is one of the rewards.

For each goal you will receive a certain amount of Agility and Ranged experience (see table below). After 5 goals, the game is won and you get your very own Gnomeball. Note though that you must bank this Gnomeball to get another one.