0985
Dominion Tower
Description:
The Dominion Tower is a place not for the weak hearted, but for some fearsome warriors. A place to fight some of the most fearsome quest bosses around. The more you defeat, the better the rewards you will receive.
Skill Levels Required:
None.
Quests Required:
Must have completed at least 20 of the following:
Another Slice of H.A.M., Between a Rock..., Birthright of the Dwarves, Blood Runs Deep, The Branches of Darkmeyer, Contact!, The Curse of Arrav, The Death of Chivalry, Demon Slayer, Desert Treasure, Diamond in the Rough, Do No Evil, Dragon Slayer, Dream Mentor, Family Crest, Fight Arena, The Firemaker's Curse, The Fremennik Trials, Glorious Memories, The Great Brain Robbery, Haunted Mine, Holy Grail, Horror From The Deep, Legends' Quest, Lost City, Love Story, The Mighty Fall, Missing My Mummy, Monkey Madness, Mountain Daughter, My Arm's Big Adventure, Nomad's Requiem, One of a Kind, Recipe for Disaster, Ritual of the Mahjarrat, Shadow of the Storm, Spirits of the Elid, The Temple at Senntisten, TokTz-Ket-Dill, Troll Romance, Troll Stronghold, Vampyre Slayer, A Void Dance, The Void Stares Back, Wanted!, While Guthix Sleeps, and The World Wakes.
Items Needed:
Armor, weapon, food, and potions.
Skill Levels Recommended:
80+ in all Combat skills. 110 Combat is suggested by the Strange face.
Starting Point:
Dominion Tower, across the bridge South East of Shanty Pass.
Is this MiniGame Safe to play?:
Yes
Getting Started:

The Dominion Tower is a minigame that allows you to fight bosses from many of the quests you've completed. 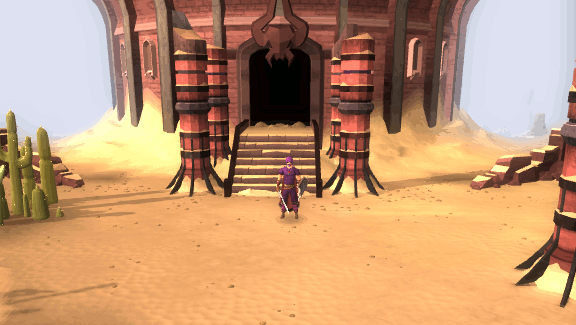 Once you get there, you must first talk to the Strange face to learn about the tower and gain access to the bank. You can also get a Dominion medallion from him, which can teleport you to the Dominion Tower up to 3 times a day. 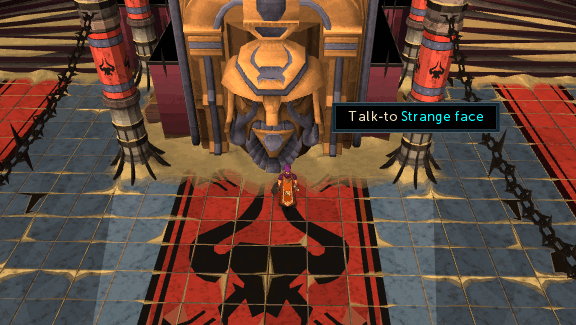 There are 5 different modes in the tower: Climber, Endurance, Freestyle, Spectator and Special. 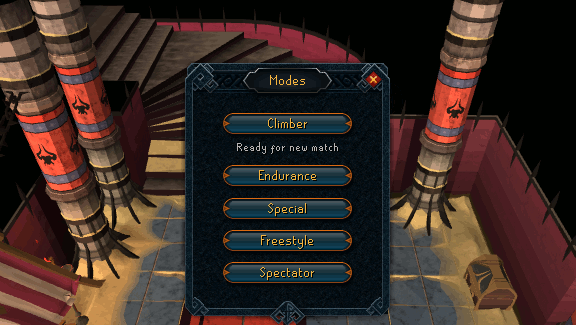 This mode consists of climbing through the floors, facing a random boss on each floor. You are able to bank for supplies and equipment between fights. However, before starting a floor you must spin the handicap wheel which will assign a handicap designed to make the fight more difficult to you for the duration of your climb. These handicaps stack until you will eventually have all available handicaps applied to you until you lose a fight or choose to end your climb by leaving via the chain next to the bank box. 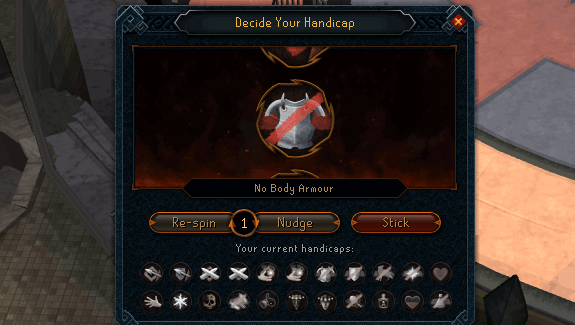 You have 3 chances to either "nudge" or "re-spin" the handicap wheel to possible get a more help handicap that could benefit you better than another.

Below you find a list of the handicaps. When you nudge a handicap, the tower will scroll UP. So if you nudge 'poison' the 'reduced ranged defence' handicap will be activated.

If you die while in a battle, you will gain significantly less Dominion Factor. If you want to stop, you can click the "hold on" button instead, and you claim your reward or go back down to the lobby.

Endurance consists of climbing through as many floors as you can without access to the bank. Therefore, you must bring everything you think you'll need to survive as long as possible, including any equipment or supplies not provided by the tower (e.g. Ice gloves for Desert Treasure bosses and elemental runes for Dagannoth Mothers). Unlike Climber, this mode does not have handicaps and is simply about completing as many floors as you can with limited supplies. Endurance awards far less Dominion Factor than Climber, but can be used to kill a large number of bosses quicker as you don't have to wait for the handicap spin each time. There is a cap of 250 floors in this mode.

Rumble mode is similar to Endurance in that the aim is to survive for as long as possible without banking, however, it differs in that you must fight multiple bosses at once which spawn endlessly in the same arena until you are killed. However, you can also choose to play this mode in an instance with up to 5 other players to help you, although it should be noted that the maximum number of bosses that spawn at once is dependant on the number of players in the instance:

The following rules also apply when fighting in Rumble Mode:

In addition to fighting the bosses, you will also have to look out for several random events that will occasionally appear:

However, power-ups will also occasionally spawn in the arena to help you:

Freestyle allows you to choose the boss you want to fight and select any handicaps you want applied. You must have first defeated a boss in both Climber and Endurance to unlock access to them in Freestyle. This mode awards no Dominion Factor for beating your chosen boss.

You can use this mode to spectate any fight in which the player fighting has the option for spectators ticked.

These are the bosses that are in the tower. You need to complete the quest the boss is in to be able to fight them in the tower.