0962
Clan Wars
Description:
Clan Wars was released by Jagex on December 10, 2007, and updated on September 9, 2008. This mini-game is intended to allow clans to war against each other, either in safe or dangerous mode of play.
Skill Levels Required:
None.
Quests Required:
None.
Items Needed:
None.
Skill Levels Recommended:
High Combat level.
High Magic level.
High Ranged level.
Items Recommended:
Melee/Magic/Ranged combat gear, Potions, and Food.
Starting Point:
The Gamers' Grotto, north of Falador.
Is this MiniGame Safe to play?:
No
Getting Started:

The safety of this activity depends on the chosen mode of play. Some settings can result in loss of items. Beware!

How To Get There:

The Clan Wars lobby can found in the Gamers' Grotto, just north of Falador. You can use a Games Necklace to teleport there. 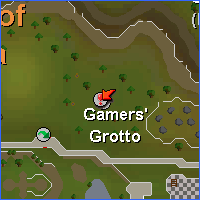 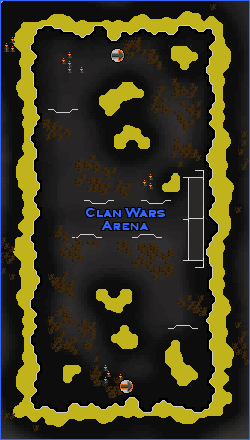 Death Dot (DD):
The complete clan stands on one spot, so that it looks like only one person is standing there. When the opposing clan comes to attack, the leader shouts a name or level for everyone to attack. Sometimes the clan's members do not stand in a dot, but rather in a line or a kind of formation close together.

Lure:
This is used in conjunction with the above. One person, usually of a low combat level, will stand at the front and will try to get all of the other clan to attempt to attack him. From the moment he is being attacked, he will run back to where the rest of his clan is hiding, who will then attack the opposing clan.

Pile:
This strategy is plain and simple. As much people as possible will attack a single target at once.

Tank:
A high defence level and bonus is needed to implement this strategy. It is most useful if many people are trying to pile you. Run around walls or trees to get them stuck. Then, the rest of your team will attack the opposing team.

There are many capes that can be worn to distinguish you and your fellow clan-members from others. When you wear a wilderness team cape anyone who is wearing that cape will appear blue on your mini map. These cape can be bought from sellers scattered throughout the wilderness, one of which is located at Clan Wars. Speak to Larry if you wish to buy a Team Cape. 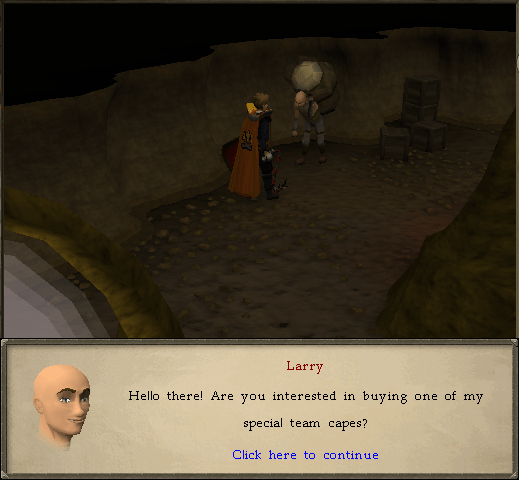 There are two other portals in the lobby that lead to 'Free for all' arenas, in which you may attack any player regardless of their combat level. You do not have to be part of a clan to enter and fight in these arenas. No rules apply in these arenas, this implies that fellow clan members will be able to attack you. The white portal on the left is the safe arena, while the red portal on the read will lead to the dangerous arena. 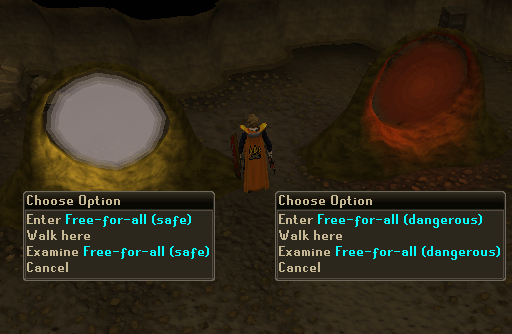 Once you step through the portal of your choice, you must cross the ditch to engage in combat. When you are killed you will respawn back at the Clan Wars lobby. 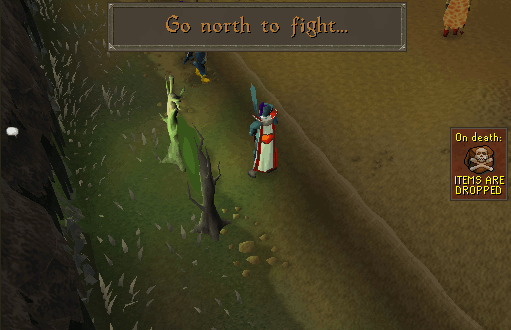 Note: If you die in the dangerous arena you will lose your items, be careful! As a gravestone will not appear, you will not be able to retrieve some of your items.
In the safe arena you keep all your items. You will be able to loot some of the others member's items when they die. These items include food, options, runes, arrows, and other types of items you can use to replenish your supplies.

There are no rewards for this mini-game besides the glory of your clan defeating another.