0466
Castle Wars
Description:
Welcome to Castle Wars, RuneScape's very own take on the classic game of capture the flag.

The game of Castle Wars is very simple: players are divided into two teams, and each team tries to invade the others castle, capture their flag, and return to your own castle with it. Click on your own standard at the top of your castle to score. However, accomplishing this is much harder than it sounds.

A game of Castle Wars lasts twenty minutes, with a five minute period in between each game. You are given a cape wear in the game, so you can't wear your own.
Skill Levels Required:
None.
Quests Required:
None.
Items Needed:
None.
Skill Levels Recommended:
High level combat skills are an advantage.
Items Recommended:
Armor and a weapon (capes cannot be worn).
Starting Point:
Castle Wars lobby, west of Yanille.
Is this MiniGame Safe to play?:
Yes
Getting Started:

To play Castle Wars, you'll first have to make your way to the lobby. There are a few ways to get your way there with the most convenient method being a Ring of Duelling, an enchanted emerald ring. After you operate it, you will see the screen below. Obviously, choose the Castle Wars option.

The Lobby and Waiting Room 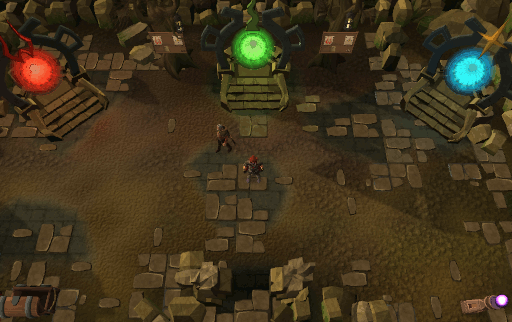 The waiting room is, obviously, the room you wait in for the next game to start. Here, you will see everyone who is on your team and how much time is left until the next game begins. 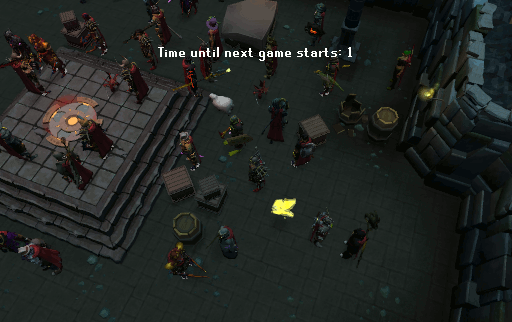 Once the game starts, you have two minutes to leave the start room or be removed from the game. Before leaving, you can takes bandages from the table to heal you and restore run energy. If you wish to leave the game, there is a portal here to do so.
If it's your first game, the screen information may be a little confusing at first. This should clear any confusion. 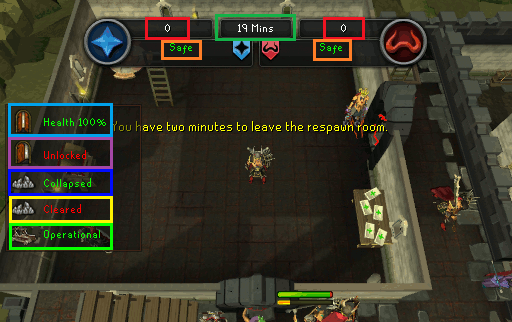 Below the start room is the supply room and here you will find several items you can use to help defend your own flag and capture the opposing team's flag. 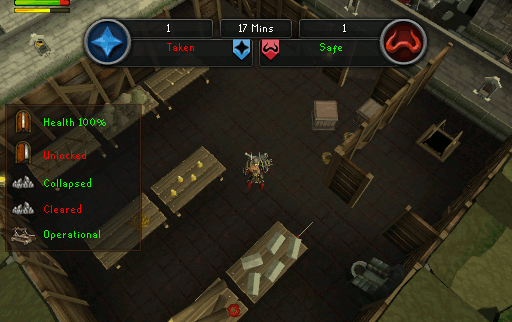 With the exception of your respawn room, everywhere in the arena is a multicombat zone. 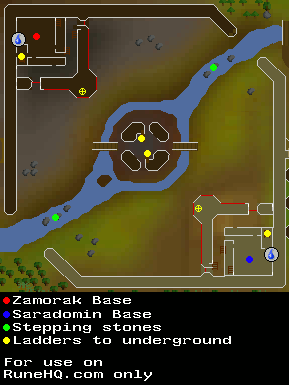 The stepping stones aren't commonly used, but they are useful when being chased with the flag. Simply click on the stone in front of you to cross the river. 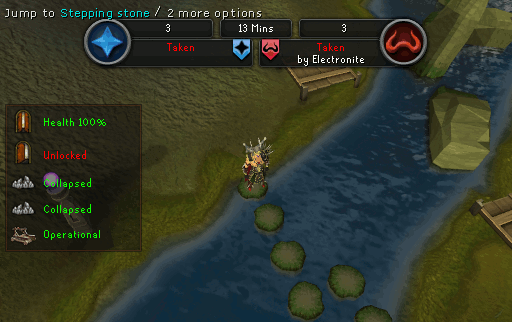 The catapult is located on the outer wall of your castle. Click on it with a rock in your inventory to use it. Click on the map to aim and click fire to cause damage to nearby enemies. 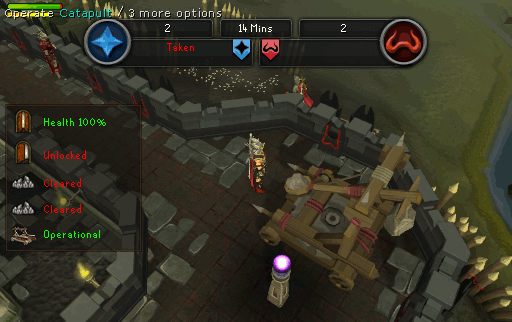 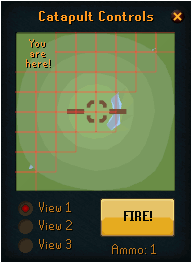 A large battle usually ensues to capture this area because it's a direct route from your castle to your enemies. 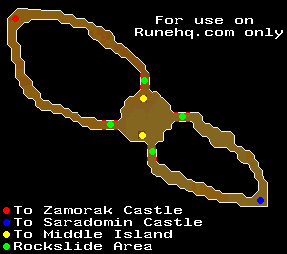 On each path before the middle room is reached, you may encounter a rockslide. This blocks you path and must be destroyed to get past. 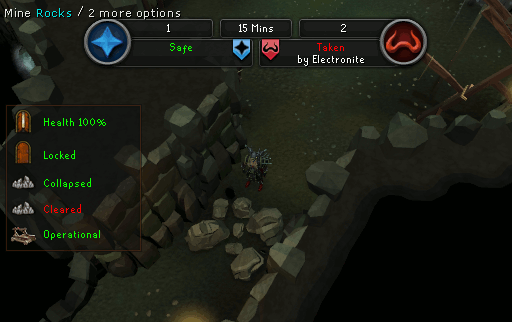 It is only recommended to attempt to capture the flag if you have high combat stats (80+) and good armor (God Wars Dungeon armor, Barrows, Eastern armor). It is vital to have several explosive potions and as many bandages as possible to successfully escape the enemy's castle and make it back to yours alive.

The most essential part of the game is being able to protect your own standard. One of the simplest ways to do this is by setting up barricades inside around your castle so that the opposing team cannot easily access your flag. Once you've collected some barricades from the supply room, simply stand where you want to place one and click set up barricade. (Note: Your team can only set up 10 barricades at a time and they can be destroyed by the other team so will most likely need to be replaced regularly).
Alternatively, if you are attacking the opposing team's castle, you may need to destroy their barricades. You can do this by attacking them, burning them with a tinderbox, or using an explosive potion to destroy them instantly. Therefore, it's recommended to collect several explosive potions before leaving your castle. 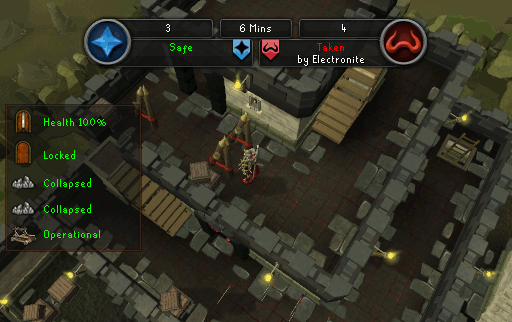 After playing a large number of games (at least 60), you may receive a Hybrid helm. You can choose between a Trickster, Battlemage, or Vanguard helm and once owned, these helms will provide a damage bonus when playing certain Minigames (see Hybrid armor special report).

Wearing armor into a portal that is not that god's armor will transform you into an animal. (Example: Wearing a holy symbol into the Zamorak Portal)