0996
Cabbage Facepunch Bonanza
Description:
Prepare to enter a dungeon where you must avoid all of the dangerous traps and monkeys, while collecting trophies.
Skill Levels Required:
None.
Quests Required:
None.
Items Needed:
None, you cannot enter with any items or followers.
Starting Point:
Gamer's Grotto, North of Falador.
Is this MiniGame Safe to play?:
Yes
Getting Started:

Make your way to the Gamer's Grotto, North of Falador and East of the Falador Lodestone. Enter the Grotto, then head to the North-Easternmost corner. 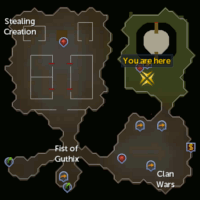 Note: Players cannot bring/wear any items or have a follower out. 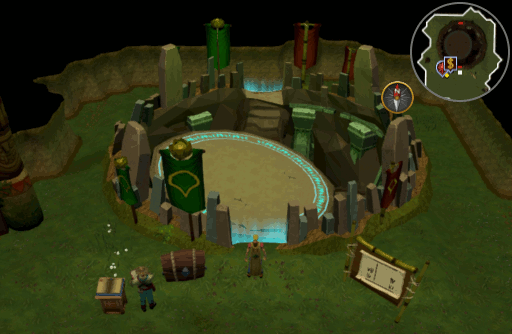 The point of this minigame is to survive a dungeon for 10 rounds. Each round will last for 60 seconds, and you will have to get to one end of the dungeon to the other end of the dungeon (safe zone) while surviving the hazards. After all the players have made it to the safe zone a 10 second countdown will begin, and when it hits 0 the dungeon will rework itself into a new route and the safe zone will be on the other side of the dungeon. Players who do not make it to the safe zone will be turned into a gorilla guard, where they will get to attack other players. If all players have been turned into gorillas, the game is over.

Each time a player makes it to a new round they will receive 1 trophy.

If a player fails to make it to the safe zone in time, they will be turned into a gorilla guard. While you are a gorilla you may try and take out the other players in the game, for each player you take out you will receive 2 trophies. 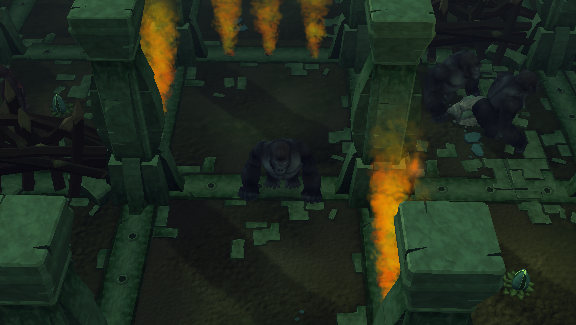 The above method is not the only method to gain trophies. Players are able to gather extra trophies by mining cabbage ore veins, harvesting cabbage leaf patches, Wishing-cabbage Bush or killing monkey minions.

The dungeon has several hazards inside of them that are designed to make dungeons more difficult for players to complete, by slowing them down or even blocking paths.

You can only have 1 passive ability and 2 active abilities. To change your abilities you can open the rewards interface and drag your chosen abilities onto the skill deck.

A player may spend their Renown points on rewards, from the Quartermaster. The capes were a reward of the minigame, when it was considered a World Event. It turned into a minigame after the event, and these capes became unobtainable. Free players earn renown at 66% of the rate that members do. The Cabbage Facepunch Bonanza emote can be unlocked by surviving 40 rounds while you are in human form of this minigame. You do not need to purchase the emote, as it will be unlocked automatically. The emote will differ depending on what faction you decided to side with.