There is a bank in Zanaris (Lost City), Which is just north of the general store. 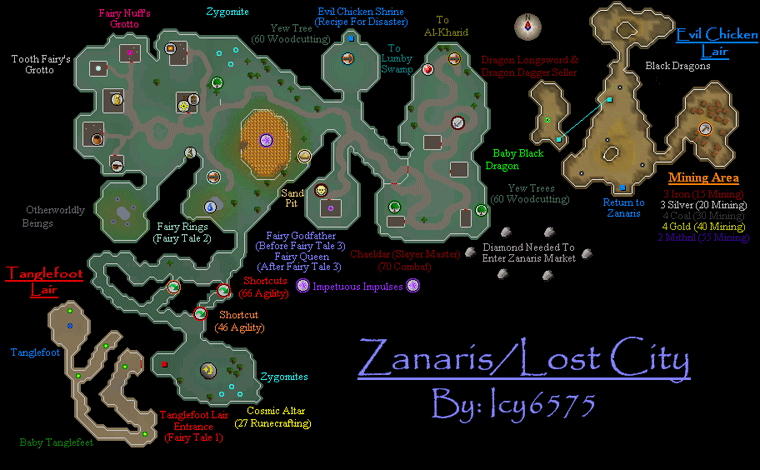 The market area can be found to the east of Zanaris (Lost City) and costs 1 cut Diamond to enter. In this area Jukat sells Dragon daggers for 30,000 coins, and Dragon longswords for 100,000 coins.

Irksol is the Ruby ring Trader in the Market. He has up to 10 Ruby rings in stock, and is located near the gem icon to the north.

Lunderwin will pay 100 coins for each un-noted Cabbage. Sacks of Cabbages cannot be brought into the market place.

A Cosmic Altar can be found to the south of the city. Two Agility shortcuts that allow faster access, one requiring 46 Agility for the medium shortcut, and 66 Agility for the advanced shortcut.

Located next to the wheat field by the city are some very vocal cows next to the bank. South-west of the field are three talking sheep. They can be sheared by right-clicking on them and selecting 'Shear Sheep', producing Wool.

A sand-pit is also found here which can be used for glassblowing.

Next to the windmill can be found a field of grain allowing for easy access to making flour. With the numerous locations of fountains making water gathering a breeze. A range can be found to the south of the bank, near which a Chocolate bar can be found.

Chaeldar which is the fourth hardest Slayer master can be accessed here. A combat level of 75 to begin assigning tasks to players.

Sacrificing a Raw chicken on the shine which is close to the original entrance of the Lumbridge Swamp shed. The lair houses 4 Black dragons and a Baby black dragon, as well as the Evil Chicken itself.

Fairy Queen - The ruler of Zanaris.
Fairy Godfather - An evil fairy wanting to control the Fairy Realm.
Slim Louie - A henchman of the Fairy Godfather.
Fat Rocco - A henchman of the Fairy Godfather.
Fairy Nuff - A fairy nurse.
Co-Ordinator - Helps fairies in their travels.
Fairy Fixit - The repairman and creator of the fairy rings.
Fairy chef - Local chef of the area.
Gatekeeper - A tree-like figure that guards the gates to and from the marketplace.
Jukat - shopkeeper.
Irksol -shopkeeper.
Lunderwin -shopkeeper.
Chaeldar - Slayer master in Zanaris.
Blaec - Owner of a sandpit.
Zanaris choir - Appears and talks to you occasionally.
Zanaris Frog - Appears and say random things.
Wandering Impling - Introduces players to the Impetuous Impulses minigame.