0607
Tree Gnome Stronghold
Description:
The Tree Gnome Stronghold, also called Ta Quir Priw in Gnomish, in the kingdom of Kandarin is one of the largest cities in RuneScape, spanning quite a large area, and is populated solely by gnomes. Its most notable features are the Grand Tree, the Gnome Stronghold agility course, and the Gnome Ball field.
Directions:
You're able to simply walk in. Click the front door and Femi will appear saying "Hey!" you reply "Hi!" and she asks you to help her with some boxes. Your character grabs the boxes and when you next click the front door, it opens. No quests at all it seems.

From Ardougne (East), run/walk North West until you reach the Stronghold.

The Gnome Glider, which is located on the top level of the Grand Tree, allows quick transport to the peak of White Wolf Mountain, Al Kharid, Karamja, the Feldip Hills (after finishing One Small Favour) and the Tree Gnome Village (after finishing The Prisoner of Glouphrie).

Just below the entrance to the Grand Tree, there is a Spirit tree that players can use after completing The Grand Tree. It provides transports to the Tree Gnome Village, the battlefield of Khazard (near Ardougne), North East corner of the Grand Exchange, and to South Feldip Hills.

Players can use the Balloon Transport System after completing Enlightened Journey. This can transport a player to Entrana, Taverley, the Crafting Guild, Varrock, and Castle Wars.

After teleporting to the Fishing Guild by rubbing a charged Skills necklace, a player can travel West to arrive at the front gate of the Stronghold.

If The Grand Tree quest has been completed, and 37 Agility has been achieved: a player can travel from the Barbarian Assault selection from the Games Necklace, to the Agility shortcut to the South West; and into the Grand Tree.

Finally, seed pods from Gnome Restaurant minigame can be used to transport a player to the Grand Tree instantly. They are consumed after one use.

Another way to get there is to teleport to the Eagles' Peak lodestone and head South to the main gate, or alternatively use the Agility shortcut over the Western fence into the terrorbird pen.
Quests Available in the Area:
The Eyes of Glouphrie
The Grand Tree
Monkey Madness
Nearest Bank:
Gulluck and Sons
Rometti's Fine Fashions
Blurberry's Bar
Grand Tree Groceries
Gianne's Restaurant
Map: 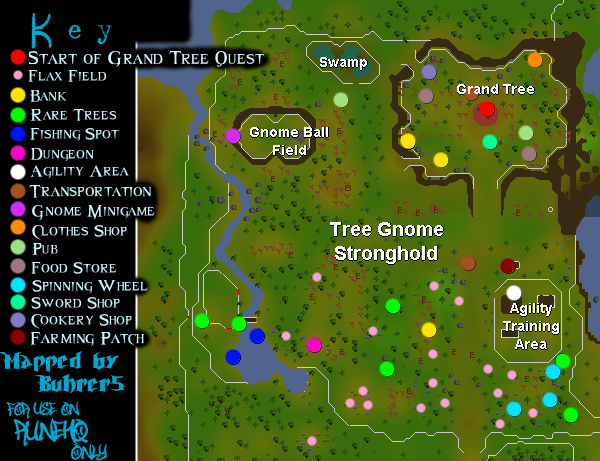 The Grand Tree is the largest structure within the Stronghold and is located in the North East.

The Gnome Stronghold Agility course is the lowest-level Agility training course in RuneScape, and is located in the Eastern region. It is impossible to fail or to lose any life points on this course. However, you can fall off the courses' signpost run. You can't die by falling off the signpost run.

There is a swamp to collect king worms and swamp toads for their toad's legs for Herblore and Gnome Restaurant in the North East. Many players collect swamp toads here which sell for a decent price.

The Gnome Ball field is in the North West.

There are a total of seven yew trees and three magic trees for Woodcutting, which combined with the close bank makes it a great place for training level 99 Woodcutting.

There is a small flax field, as well as spinning wheels for Crafting and Fletching.