1007
Sophanem Slayer Dungeon
Description:
This Slayer Dungeon contains many creatures that have been tainted by corruption.
Quests Required to Enter Area:
Icthlarin's Little Helper
Directions:
To access Sophanem, you will need to travel South of Al Kharid and Pollnivneach, East of Menaphos. This city can be accessed by the Magic Carpet Transportation, Teleportation via the Pharaoh's sceptre/Sceptre of the gods (Jalsavrah or Jaleustrophos teleport), or across the bridge once you have completed The Jack of Spades. 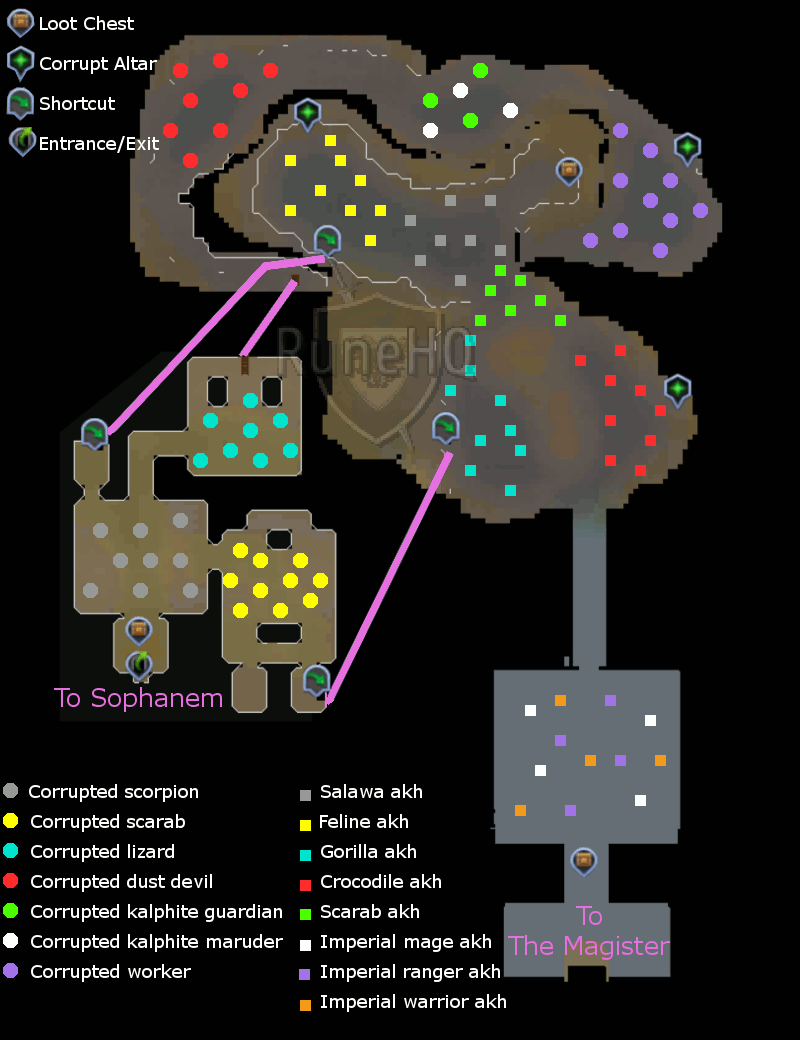 Instructions:
The Dungeon
Within the dungeon, you will not need to pick up your drops. Almost everything is automatically sent to the chests; these you can loot at the end of your trip or wait until your chest is full. When your chest is full, your loot will no longer automatically transport there and will begin to appear on the ground as per normal combat. If you choose to disable this feature,right click on a chest and toggle drop options, you will gain the possibility of having your loot doubled. Note this does not include the loot that would normally fall to the floor if your items were going to the chest, such as Key to the Crossing drops.

While in the dungeon, fighting the monsters, you will gain corruption. This causes the player to deal and take more damage during combat. For every percentage of corruption you gain, the amount of damage will increase by an equal amount; up to a total of 25%. The amount of corruption you gain varies depending on how high of a Slayer level the Monster requires for you to damage it. The lower ones will only add 1%, while the higher ones can add up to 5%.
It is possible to remove this corruption at one of the three altars within the dungeon.

When killing monsters within the dungeon, you will also receive Reputation. The higher Slayer level the monster requires, the higher the reputation points received. Points will also be doubled if you are on assignment here as opposed to just killing the monsters. Some of these monsters can be substituted when you have been given the normal creature as a task. For example, if you have been given the task for Dust devils, you can kill Corrupted dust devils to complete your task.

The Magister
Within this dungeon, we also find a Boss. The Magister cannot be killed in a group and, unlike other creatures within the dungeon, a Feather of ma'at is not needed per kill, but a Key to the Crossing is necessary to access him(activate the soul obelisk within the dungeon). Level 115 Slayer is required to damage him. It is possible to boost your level to fight The Magister, however, you must maintain this boost for the duration of the battle.