0490
Port Phasmatys Map
Description:
Port Phasmatys is a small coastal town located to the far east of the swamp region of Morytania, to the very far north-east of the RuneScape realm of Gielinor, and east of Canifis.
Quests Required to Enter Area:
Ghosts Ahoy
Directions:
There are two main entrances: one from the west, and another from the north. Prior to completion of the Ghosts Ahoy quest, entry to the town requires two ecto-tokens while wearing a ghostspeak amulet. After the quest the player may enter the town at no cost, and a ghostspeak amulet is no longer needed unless you wish to talk with the ghosts. A ghostspeak amulet is recommended to access the bank, but not needed if you use the "quick-bank" option. Alternatively, players can arrive on a charter ship. The town is populated by ghost characters, and an Amulet of Ghostspeak or cramulet is needed to talk to the majority of the inhabitants. The town features heavily in the Ghosts Ahoy quest.
Quests Available in the Area:
Animal Magnetism
Cabin Fever
Ghosts Ahoy
Making History
Rocking Out
Rum Deal
Garden of Tranquillity
Nearest Bank:
There is a Bank in Port Phasmatys to the south-east, and players may use the "quick-bank" option even without an amulet of ghostspeak. Prior to the bonfires update, some players liked to train Firemaking in Port Phasmatys because it is reasonably quiet and contains a long east-west stretch of road.
Map: 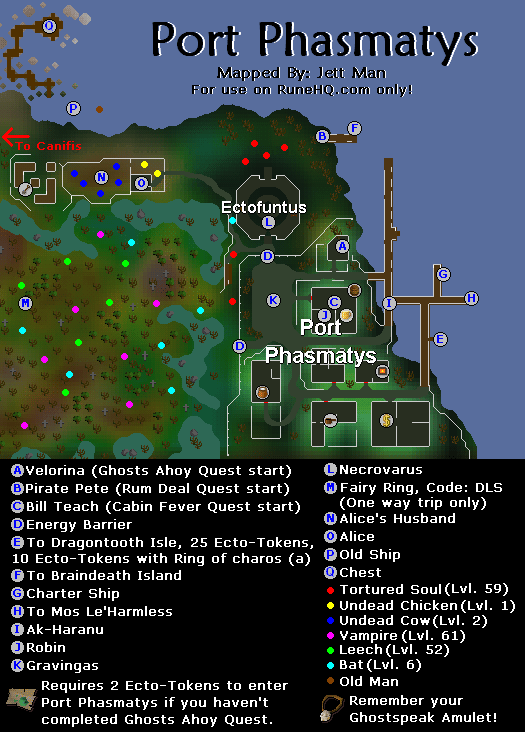 The Other Side
Shipwrecked
Phasmatys
Brew Hoo Hoo

After starting the Ghosts Ahoy quest, players can worship the Ectofuntus to receive four times Prayer experience for every bone.

Phasmatys has one of the closest furnaces to a bank in the game, third only to those in Edgeville and Neitiznot, making it popular for players training Smithing or Crafting.

There is a vegetable and herb patch used in the Farming skill just to the west of the Alice's farm west of the town. Lyra can look after crops for players here. There is also a farming shop run by Alice where players can buy the usual items for use in farming, as well as undead cows and chickens.

There is a general store in Port Phasmatys, located in the south-west part of the town. The pots and buckets in the store can be handy for praying at the Ectofuntus or brewing ales in the brewery.