0992
Polypore Dungeon
Description:
The Polypore Dungeon was created by a Ramokee skinweaver who has over time infused the creatures inside with the fungi that grows throughout the dungeon, most of which require a high Slayer level to kill.
Skill Levels Required to Enter Area:
None, but between 82 and 95 Slayer is required to kill most of the monsters inside.
Quests Required to Enter Area:
None.
Items Needed to Enter Area:
None, but runes and Mage armor are highly recommended if planning to fight the monsters as Ranged and Melee damage is capped at 40 per hit.
Directions:
Northeast of the Mage Training Arena, and just north of the Fairy Ring code B I P.
Quests Available in the Area:
None.
Nearest Bank:
Duel Arena.
Nearest Landmark:
Mage Training Arena.
Map: 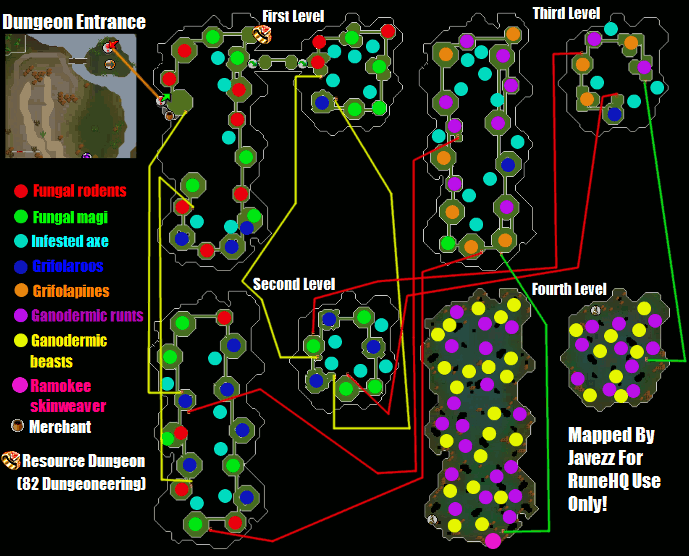 Within the dungeon (four rooms north and east of the entrance) is a resource dungeon, which requires 82 Dungeoneering to access and gives 13,500 Dungeoneering experience the first time it is entered. An agility shortcut leads to an extra part of the dungeon, and it requires 73 agility to use. Using the shortcut without 73 Agility will cause your avatar to say that "a fall would be a long way down".

In able to go up and down the floors a player must use the vines located throughout the dungeons. The deep the floor, the stronger the monsters.

Ramokee Skinweaver can be located on the bottom floor onto of some mushrooms. On the top floor of the dungeon, near the entrance, is a dungeon hermit who sells Mycelium web armour and general supplies. He can also exchange items with players who bring him drops from the monsters of the dungeon.

Through each level of the entire map the center area is accessible withough any special skill requirements. To the right is a Agility area, which is only accessible via level 73 agility shortcuts from the main area on the first level. The left area is the "Resource Dungeon'. Players will need 82 Dungeoneering. Use the vines in the dungeon to go up and down the floors.

In three places players can fine Neem Drupes on the first level. Two vines are on the platform containing Merchant and the dungeon's entrance. A third is at the end of the first floor near the rope that takes players to the second floor.

The Resource Dungeon contains two vines of Neem dupes by the entrance.

A player can pick the drupes from the vines. If the player has an empty jug or jug of neem oil in inventory, the drupes are automatically squished into neem oil when picked. This is a way for players to acquire neem oil without first having to kill polypore monsters for their drupe drops.

A vine holds six drupes. Drupes grow back after being picked at a speed of about 5 seconds per drupe.