Many of Ali Morrisane's Magic carpets fly to the city. Carpets near Shantay Pass, Nardah, Sophanem and Menaphos all go directly to the city. (Carpets near Uzer and the Bedabin Camp can also be used, by using them to go to the Shantay Pass carpet.) Each use of a carpet costs 200 coins normally (or less, if the player has done the Rogue Trader miniquest or has an activated Ring of charos).

Slayer rings teleport to the house of slayer master Sumona. (They do not teleport directly to the Desert Slayer Dungeon as some players believe, but the well's entrance is a block south from the teleport destination.)

The Mask of Mourning and Helm of Keening can teleport to the Pollnivneach well. Both items can do this up to 2 times daily. A Facemask or other protection from the dungeon's smoke is required for the player to avoid taking damage.
Nearest Bank:
No Bank, so players cannot store or retrieve their items. One solution to this problem is to use the magic carpets to fly between Pollnivneach and Nardah, using the bank there. Players short of money, may find the carpet fees prohibitive. If so, killing Goats in the desert outside Nardah and selling their Desert goat horn drops on the Grand Exchange can be useful. The quickest banking solution involves using Rings of duelling to teleport to the bank chest at Castle Wars (or a suitable home teleport) and then using Teleport to House to return to Pollnivneach. However, this is available only to members who have a Construction level of 20 or more, so that they can locate their house at the Pollnivneach portal. Alternatively players with the ability to create Rings of slaying can teleport directly to Sumona.
Map: 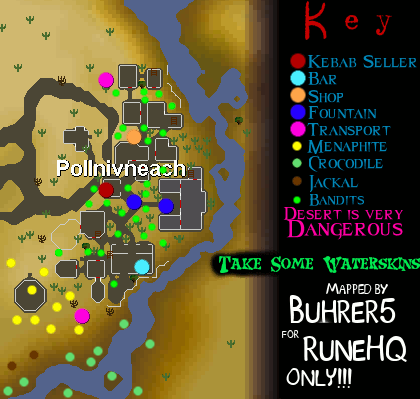 A Summoning obelisk. This is a small obelisk, where only Summoning points can be recharged.

A portal to Player-owned houses.

Houses, Bandits and the bandits' headquarters.

Ali the Dyer, who can make red, yellow and blue dye for players, in exchange for coins and dye ingredients.

The starting point for the Smoking Kills quest. Sumona is here until the quest is completed.

A deposit chest becomes available in the northeast after completing Deadliest Catch.

A house containing slayer master Sumona, once the Smoking Kills quest is complete.