0775
Moonclan Island Map
Description:
Lunar Isle is an island shaped like a crescent moon, located in the westernmost point of Gielinor. It is accessible for member players who have gone far enough into the Lunar Diplomacy quest. A seal of passage is required to talk to any of the NPCs on the island, before or during Lunar Diplomacy (except for 'Bird's-Eye' Jack, who is one of the bankers); otherwise, the player will be sent back to Rellekka. It is not required after the quest. The Astral Altar is located on this island.
Quests Required to Enter Area:
Lunar Diplomacy
Directions:

A seal of passage is not required for this transportation method, however, you must have completed the The Fremennik Trials to board the ship.

Talk to Lokar on the westernmost dock of Rellekka, who will take the player to Pirates' Cove. Without a Seal of Passage, players can lie to Lokar and say they're only going to Pirates' Cove, then proceed to Lunar Isle, anyway.

Board the pirate ship, and talk to Captain Bentley to go on to Lunar Isle.

Fairy ring C•I•P to Miscellania, walk south-east to the dock, and ride the southernmost boat to Rellekka.

Nearest Bank:
A bank is in the centre of the town. After players have completed Dream Mentor, they can right-click 'Bird's-Eye' Jack in the bank and select "Using the bank" to use the bank without their Seal of passage. Bank on Lunar Isle is the closest one to the lodestone network.
Map:

Note: that the name of the Map can be both Moonclan Island or Lunar Island, these two names are both used by Jagex. 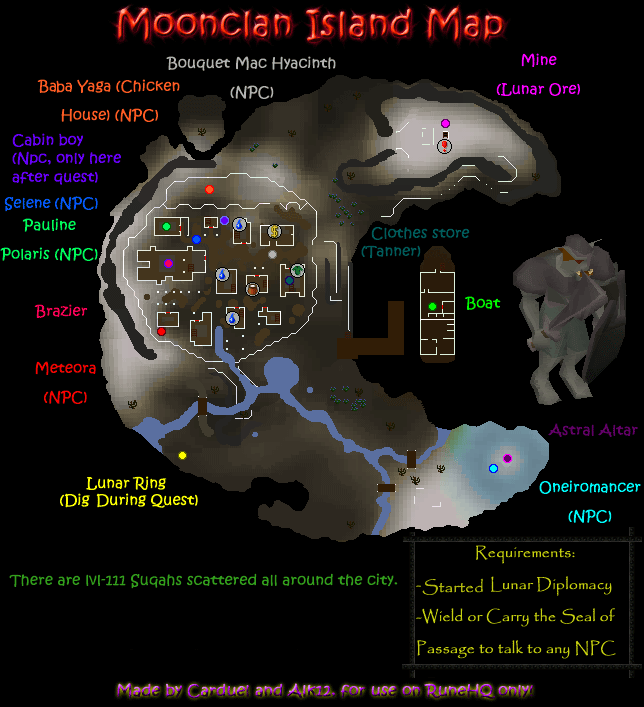 Astral Altar: At the altar, players can switch their spell book to Lunar Spells or switch back to the normal spellbook if they are currently using Lunar spells. Players can also switch from Ancient Magicks to Lunar; however, if they switch back they will return to the normal spellbook. Players can also make Astral runes here with the runecrafting skill and purchase Lunar equipment from the Oneiromancer if they lose theirs.

Baba Yaga's Magic Shop: Baba Yaga's Chicken-Leg House walks around in the fenced area north of the bank. She sells all runes (except Cosmic runes) and Battlestaves.

Brazier: Located in the largest most westerly building. Players can access the Dream World during the Lunar Diplomacy and Dream Mentor quests through the brazier.

Flax: Flax fields are north-east and south-east of the main gates and just north of the town, outside the town walls.

Lunar Mine: The mine contains rune essence rocks in the centre, 6 gold in the west, 3 silver south, 3 gems south-east, and to the north-east 1 gold, 2 silver, and 1 gem rock, like the ones in Shilo Village.

Range: There's a cooker in the building to the left of the bank, just next to the sink, you can use to cook food, though there's not the "Cooking range" icon on the minimap and the world map.