0962
Living Rock Caverns
Description:
This area is useful for higher level fishing, mining and cooking skillers. Combat training is a possibility but the drops aren't that good. The best drops a player could get from one of the monsters would be from a living rock patriarch (which appear at random). Some of the drops from a patriarch include 3 noted runite ore, 8 noted uncut diamonds, 125 blood runes, and 125 mud runes. This is quite a nice drop but the appearance rate for the patriarch doesn't make it to profitable.
Skill Levels Required to Enter Area:
None.
Quests Required to Enter Area:
None.
Items Needed to Enter Area:
Armor and Food, especially if your combat level is low. Level 120 and 140 Living Rock monsters multi-attack area. There are several main ways to get there:


Directions:
The kingom of Asgarnia.The Living Rock Caverns are found below the Dwarven Mine beneath Ice Mountain, near Falador.
Quests Available in the Area:
None.
Nearest Bank:
Near the entrance of the caverns. (Deposit Only)
Nearest Landmark:
Coal and Gold Deposits.
Nearest Other:
Farli, Living rock protectors, and Living rock strikers, possibility to run across a Living rock patriarch. Fishmen to start Fishing Flingers Distraction and Diversion.
Map: 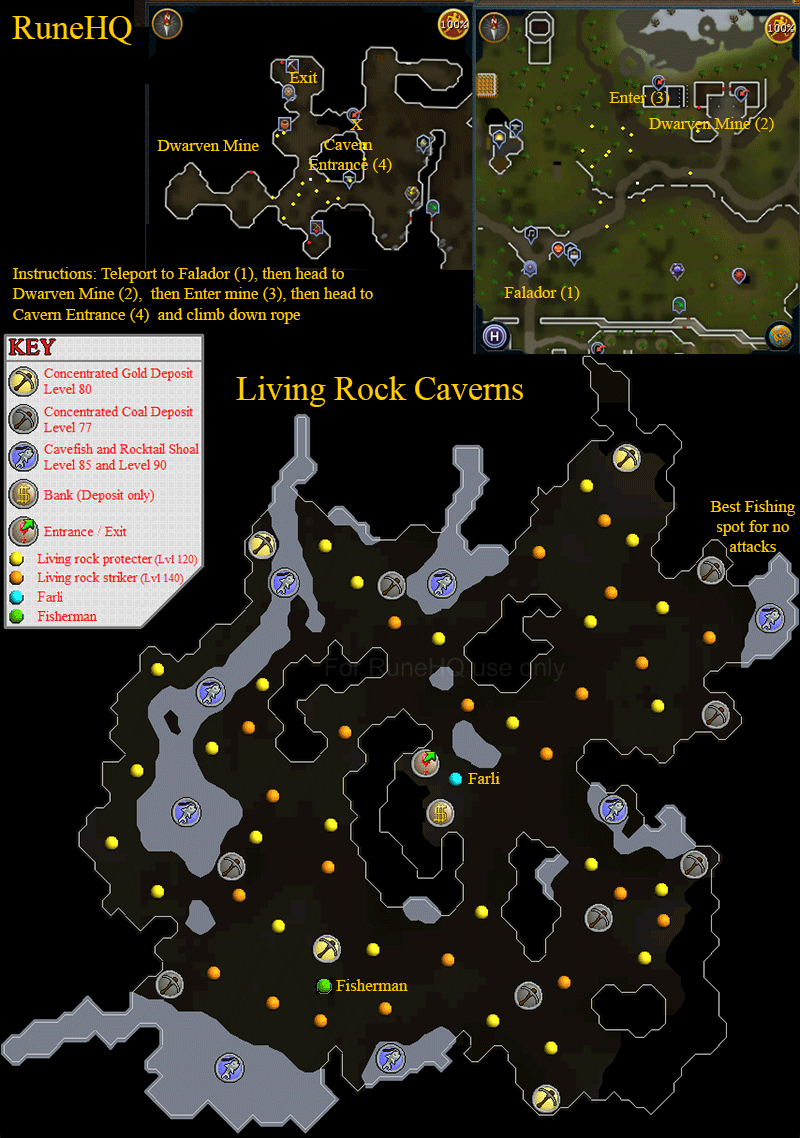 Farli is found in the central part of the cavern. Players can use the "Handy Pulley Lift" to deposit items into their banks. On the topside the rope faces east/west. The bottomside it then faces north/south. This is where you will appear if you enter into the dungeon using the Dwarven Mines. A Summoning mini-obelisk is just outside the entrance to the caves.

In order to mine withing the Living Rock Caverns a player needs to have Mining levels of 73, 77, and 80 to be able to mine the living rock remains, concentrated coal rocks, and concentrated gold rocks.

Other "rocks" found in the cavern are the remains of the Living rock creatures. These are located directly after a kill is performed. The remains are minable by the player who killed the creature immediately, and by other players after a one minute delay. The remains contain between 5 and 20 living minerals.

There are two types of fish that can be caught within the Living Rock Caverns. These are Cavefish and Rocktail. Players should note that there are no locations inside the caverns to cook these fish.

Living Rock Creatures live within these caverns. Living Rock Protectors (Level 92) and Living Rock Strikers (Level 92) can be found here as well. The Living RoCK Patriarch (Level 95) can randomly spawn every hour and has the chance to drop 8 uncut diamonds, 3 runite ores, 125 blood runes and 125 mud runes. All monsters here are considered aggressive. These creatures can be given as a Slayer task from Kuradal in the Ancient Cavern.