0525
Jiggig/Zogre Dungeon Map
Description:
Jiggig is a former ogre ritual site, located south of Castle Wars. Its primary known uses were to house the corpses of ogre ancestors, and to serve as a site for ceremonial dancing. Due to the suspicious activities of a renegade wizard, leading up to the events shown in the Zogre Flesh Eaters quest, some of the ogre corpses have been raised as undead zogres and skogres. Ogre guards have installed barricades around Jiggig to stop these undead ogres from escaping. Jiggig can only be entered during and after the Zogre Flesh Eaters quest.
Skill Levels Required to Enter Area:
No required levels.
Quests Required to Enter Area:
No required quests.
Items Needed to Enter Area:
No required items.
Directions:
The quickest and easiest way to get there is by the Castle Wars option on a Ring of Dueling or the Fairy ring code of a-l-p after completing A Fairy Tale Part II - Battle at Orks Rift.

The orges located within are strong against normal weapondary, Giving them a lower maximum hit and reduced accuracy, but fire magic and brutal arrows are very effective.

There are a vast amounts of orge coffins throughout this area. These can be opened with either the ogre coffin key or by picking the locks using the Thieving skill.
Nearest Bank:
No close banks.
Nearest Landmark:
Feldip Hills
Map: 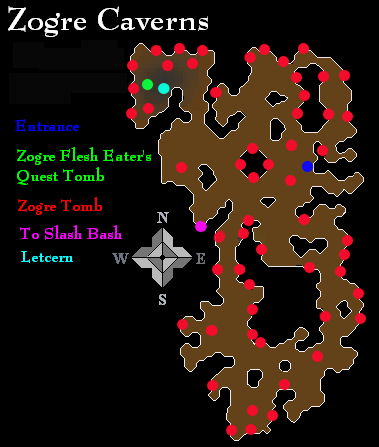 The entrance is guarded by several Ogres. Uglug Nar is a shaman who will sell the player supplies useful for fighting in Jiggig, although many of his items are not in stock by default. Grish is another shaman who starts the Zogre Flesh Eaters quest. Pilg and Grug are ogres who are wounded by fending off undead ogres. The first guards the barricade which blocks the way into Jiggig itself, and will let the player in during the Zogre Flesh Eaters quest. The second guards the only three ogre coffins that are outside the barricade, and will throw the player into Jiggig if they fail to steal from the coffins.

After climbing over the barricade you will see the reason Jiggig has his name. Zogres and skogres are seen playing drums and also singing. Beyond this area is a cave with stairs that lead down to the main part of Jiggig. Once players have passed the barricade, burying any zogre bones may cause a skogre to appear and attack, even if the player has a high enough combat level that the others are no longer aggressive.