0486
H.A.M. Hideout Map
Description:
The H.A.M. (Humans Against Monsters) Hideout is the main base of the H.A.M. cult and features in the Cave goblin quest series.
Skill Levels Required to Enter Area:
None.
Quests Required to Enter Area:
None
Items Needed to Enter Area:
A lockpick is recommended.
Directions:
Northeast of Lumbridge, opposite the cow field. Pick-lock the mine entrance and climb down the ladder using the Thieving skill for 1xp for each attempt.
Quests Available in the Area:
The Lost Tribe, Death to the Dorgeshuun, One Small Favour, and The Chosen Commander.
Nearest Bank:
Lumbridge.
Nearest Landmark:
Lumbridge cow field.
Map: 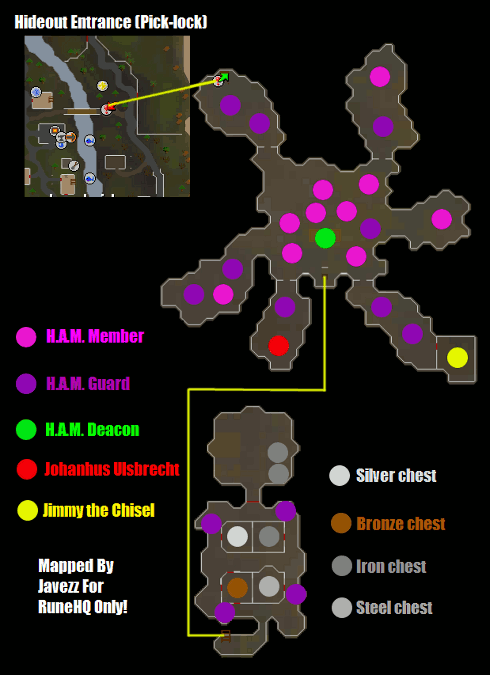 The main area is filled with male and female H.A.M. Members as well as H.A.M. Guards. The H.a.M. Deacon is standing on a podium preaching. Johanhus Ulsbrecht is located southwest, and Jimmy the Chisel is locked in a cell.

Going halfway through Death to the Dorgeshuun, there is a secret dungeon in the H.A.M. area. When the player picks the lock to the secret entrance, just south of the podium in the main chamber, the player will gain access to the H.A.M. store rooms. The stores are patrolled by guards, though after you have finished the quest, they are not aggressive (i.e. they will not attack players unless attacked first or spoken to).

Pickpocketing the guards will give the same finds as if you were pickpocketing a male H.A.M. member, except you will also get keys (bronze, iron, silver and steel), which can be used to open the chests in rooms. Unlike when pickpocketing upstairs, you will not be thrown out of the hideout when pickpocketing in the stores, you will just receive a small amount of damage (varies depending on your current life points) when you fail. If you talk to the guards, they will act surprised to see you in their "secret" storeroom, and attack you. However, if you are fully equipped with full H.A.M. Robes, they will have a few more dialogue options, and will not become hostile unless you say "Make me!" to their request for you to leave.

Everytime that you open a chest, a key of the same type will be consumed. The chest can give coins, gems, and jewellery. The items can be sold in the Grand Exchange in Port Sarim.