Below are listed the multiple ways to reach this dungeon. 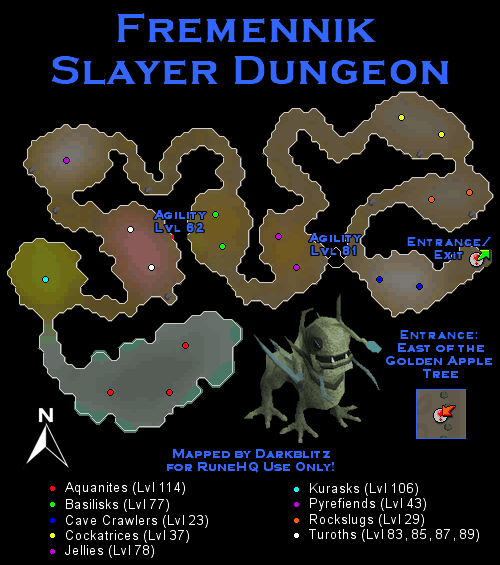 The first chamber contains eight Cave Crawlers (Level 10 Slayer). They are levels 76 and 106. This area also has a Agility shortcut (81 Agility) to reach the Pyrefiend area.

The second chamber consists of seven Rockslugs. Level 20 Slayer and a bag of salt are required to kill them. These are level 70.

The third chamber contains seven Cockatrice. They require level 25 Slayer and a mirror shield or a Mask of Stone/Reflection - without one, the player's stats (including life points) will be dangerously reduced. They commonly drop level 2 clue scrolls. These are level 44.

The fourth chamber has thirteen Pyrefiends. These need level 30 Slayer to kill them. These attack with magic so, so it is advised to wear dragonhide or other high magic defence armour.

The fifth chamber contains eight basilisks which require level 40 Slayer and a mirror shield or Mask of Stone/Reflection to kill. There is a small safe spot against the south-east wall. (The safespot spans multiple squares, and can be utilised by standing directly adjacent to the zigzag pattern.) From there, a player can safely attack any basilisk to the north. Engaging with a southern basilisk will allow them to reach the player. With level 62 Agility the player can use the agility shortcut to enter the turoth chamber. These, like cockatrices and pyrefiends, drop level 2 clue scrolls. They are level 77.

The sixth chamber contains ten jellies, which require level 52 Slayer to kill. They use ranged attacks, so melee armour is recommended. All monsters beyond and including these can drop level 3 Clue scrolls. These are level 68.

The seventh chamber has twenty Turoths, requiring level 55 Slayer to kill. They are immune to all attacks not dealt via a leaf bladed spear, a leaf-bladed sword, broad arrows, broad-tipped bolts or the Slayer Dart spell. The Agility shortcut requires level 62 Agility and leads back to the Basilisk (fifth) chamber. These are level 123, 126, 127 and 130.

The eighth chamber contains five Kurask. They require 70 Slayer to kill. Like Turoths, they are immune to all damage not dealt via a leaf bladed spear, a leaf-bladed sword, broad arrows, broad-tipped bolts, or the Slayer Dart spell. These are level 112, and are aggressive to all players.

The ninth and final chamber contains nine Aquanites. They require level 78 Slayer to kill, and have the ability to turn off a player's protection prayer. They can drop an amulet of ranging. Aquanites are not aggressive. These are level 136.