0488
Entrana Dungeon Map
Description:
Entrana Dungeon is home to the unique Dramen Tree and its guardian, the Dramen Tree Spirit, both of which feature in the Lost City quest.
Skill Levels Required to Enter Area:
None.
Quests Required to Enter Area:
None.
Items Needed to Enter Area:
Weapons and armor are required to fight the monsters inside the dungeon, but can't be taken onto the island of Entrana. However, see the Lost City guide for more information on how to obtain weapons and armor while there.
Directions:
Attempt to climb down the ladder on the northwest side of Entrana and the Cave monk there will offer a warning about the dangers of the dungeon before allowing you to climb down. After entering this dungeon it is not possible to climb back up to the surface.

WARNING: Entering the cave drains the player's prayer to almost zero. There is NO way to prevent it.
Quests Available in the Area:
Lost City and Recipe for Disaster.
Nearest Bank:
Draynor Village.
Map: 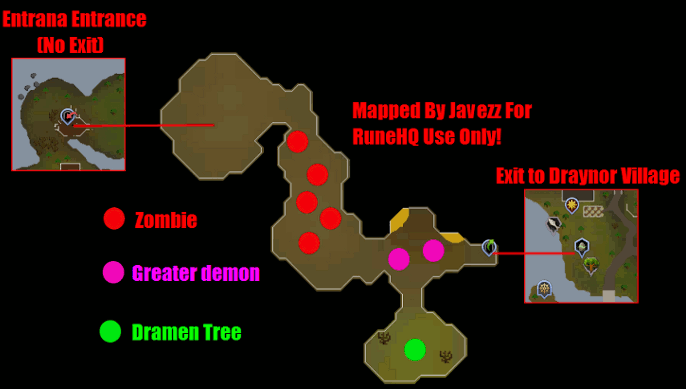 The Dramen Tree is the main use of this dungeon. While doing the Lost City quest and while freeing "Sir Amik Varze" in Recipe for Disaster, the player is required to cut branches from this tree.

When a player attempts to cut this tree, a level 90 "Dramen Tree Spirit" will appear and attempt to attack. A player however does not need to defeat the spirit again once it has been slayed the first time.

This area is a non-wilderness area that is wonderful for killing "Greater Demons". However it should be taken into account that players are unable to bring armour and weapons to this island. With this in mind player will need to create their own weapons once on the island.

If a player wishing to use Ranged, they can create dragonhide armour and fletch their own bows, crossbows and ammunition. Magic users can create their own magic robes such as spider silk and batwing robes, as well as their own wands and books/orbs.

Using melee as a form of battling is not recommended here. The absence of a anvil makes this pretty much impossible to use this type of attack method. It is possible to bring a godsword by dismantling it and then re-attaching the hilt once you are on the island. It is also useful to note that most jewellery can be brought to the island, such as Fremennik rings or an amulet of glory.

Runes can be brought to this dungeon, as they do not count as equipment. This makes magic a viable combat style, as players can use their most powerful spells without restriction, provided they also bring materials to craft a wand. Runes can also be used for High Level Alchemy. Bones to Peaches would allow a player to stay here longer using the bones dropped by the zombies in this dungeon, and the demons will also sometimes drop Tuna.