1008
Troll Invasion
Description:
Join the Imperial Guard of Burthrope in defending the walls of their beloved city from trolls! By either fending off the trolls using your superior combat techniques or using your non-combat skills to ensure the gatehouse stays in its best condition possible, the Imperial Guard needs you!
Is this Distractions and Diversions Safe to play?:
Yes
Resets:
Monthly. You can also force one reset for this activity per month by using a D&D token (monthly).
Skills Required:
None.
Skills Recommended:
High combat skills.
Quests Required:
None.
Items Needed:
Armor, weapon(s) and food.
Items Recommended:
Prayer potions (4), Super/Extreme Attack and Strength potions or Overloads, Bunyip or Unicorn pouch + scrolls, Bonecrusher.
Starting Point:
Outside the gatehouse north of the Warriors' Guild.
To Start:
Speak to Captain Jute.
Contents:
Getting Started:

Troll Invasion is a one-person activity. Trolls are attacking Burthorpe, and can be stopped with combat or skilling. 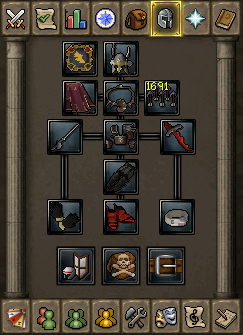 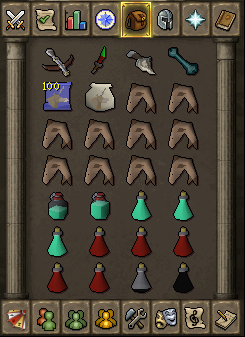 The fastest method of getting there is to use a Games necklace (8) to teleport to the basement of the Burthorpe Games room, then go upstairs and then just west. To begin, head to the gate just west of Burthorpe's castle and speak to Captain Jute. And he will give you two options, to be a fighter by choosing "Start-fighting" or a skiller by choosing "Start-repairing". 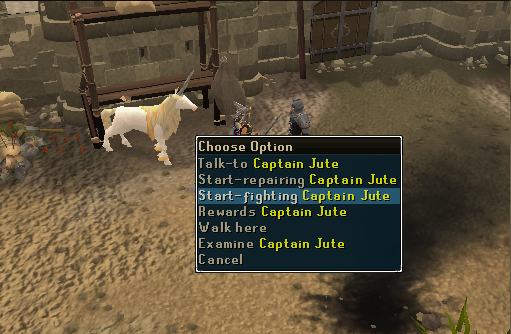 If you have chosen to be a fighter your job is to kill the 20 (or 7 if you have done it before and choose the harder option) waves of trolls invading the gatehouse. Fighters will be of course taking on the trolls in combat. The trolls will come in waves and you must defeat them all to complete the wave and move on to the next wave. In easy mode, there is 20 easy waves, and a hard mode which has 7 hard waves which will put your skills to the max. If this your first time doing this activity you will start with easy mode. While fighting do not go into the north-west alley, you will be dealt large amounts of damage from thrower trolls if you enter.

There is a supply table at the north side of the gate which can be used 5 times per wave, it will restore your Life points, Prayer points, Summoning points, run energy, and your special attack bar to full. Trolls that come near this supply table will be attacked by the gate's archers, dealing them constant damage. 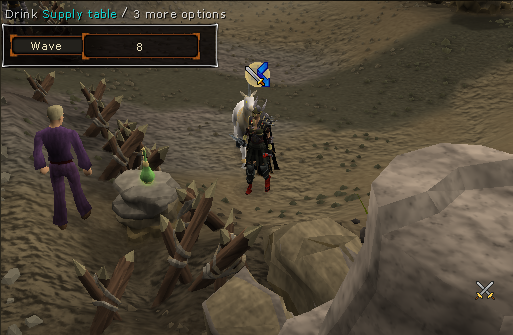 Below is the trolls that come in each wave, for both easy and hard mode, and a suggested order to kill them in.

Your job is to defend gatehouse from troll attacks and survive the attack of 1500 trolls (for maximum reward). You are doing it by 1) repairing walls and barricades to protect the gatehouse health and 2) repairing ballista and lighting its ammo and filling oil drums to speed up killing trolls. Ballista, oil drums and some repairable walls are located on top floor of gatehouse, while barricades and some walls are on the ground floor. You can move between two floors of gatehouse by using stairs at the south-east corner or you can wall climb at the north-west side. There is no access from the northern barricades to southern ones, so you need to either go around the gatehouse or through the upper floor. 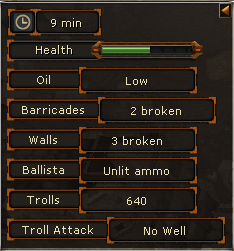 This screen shows the status of the gatehouse. When the gatehouse health drops to 0 then the game is over. The number of trolls remaining can be seen on the bottom of status screen.

Overview of the tasks 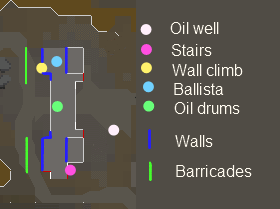 Repairing ballista (at the start of game and occasionally in the middle if the ballista is broken by troll attacks) – the state of ballista is shown on status screen. Repairing ballista gives 10 Construction xp. You can light ballista ammo if the Ballista status is "Unlit ammo" then you need to light the ammo and you will recieve 10 Firemaking xp each time.

At the start of the game you are given 12 buckets, fill the buckets up from the well (see above map). You can also pick up more oil buckets next to the well and fill them also. Oil barrels are heavy so you are at risk of running out of run energy very quick, on the other hand if you have lots of oil then you don’t need to come back for a refill in the middle of the game. When your Oil status is "Low or Empty" you need to fill the oil drums at the top of gatehouse. 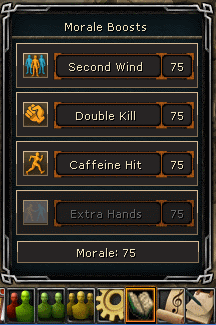 You gain 5 morale points each time you do a repair, light ammo or fill an oil drum. When you have accumulated enough morale you can start using morale boosts to help with defending the gatehouse. The morale boosts menu is located at the location of the emotes menu while you are inside Troll Invasion. Each morale boosts costs 75 morale points to activate and they last 30 seconds. There re-charge time is also 30 seconds so you can re-activate the same boost almost immediately after it runs out. The morale boosts you can use will be lit up in the boost list.

To make things more difficult, trolls also have some special boosts in store. The active troll special attack is shown at the last row of the gatehouse status screen.

Rewards:
Each month you can claim a reward book from Captain Jute. The book gives a large amount of experience in any skill chosen by the player. The amount of reward XP you gain is determined by your level in the skill you choose, the higher it is the more you will receive. And the more waves you endure, the more experience you will gain. Remember it can only be claimed once per month. Starting your first attempt of Troll Invasion once per month will also reward you with a spin ticket for the Squeal of Fortune.