0002
Shooting Star
Description:
With the expanding of its borders, the land of RuneScape is interfering with all the other events in the universe. As strange as may it sound, the shooting stars crashing into the land of RuneScape are part of a new Distractions And Diversions mini-game. This mini-game offers a new way of training your mining skill. Check your telescopes to predict where the next star might land.
Is this Distractions and Diversions Safe to play?:
Yes
Resets:
Daily. You can also force one reset for this activity per day by using a D&D token (daily).
Skills Required:
10 Mining.
Skills Recommended:
A high Mining level.
Quests Required:
None.
Items Needed:
A Pickaxe (any kind).
Items Recommended:
A Dramen staff OR Lunar staff, Amulet of glory (4), Boots of lightness, Spotted/Spottier cape, and Penance gloves. (Super) Energy potions (4), Strange fruit, Explorer's ring, Spirit terrorbird pouch with Tireless run scrolls, or anything that restores run energy.
Starting Point:
Someone's Player Owned House.
To Start:
Look through a telescope.
Getting Started:

Safety: This mini-game can be dangerous depending on which areas and worlds you visit.

You first need to identify where and when a shooting star is going to fall. This can be done by looking through a telescope in the study of a player owned house. However, telescopes only offer a 'best guess', so you will find that different telescopes and different people will get different results. The better your telescope is, the more precise the time window will be. The information will become more accurate, the closer to the time for the star to land nears. Unfortunately it will only tell you the region where a star is going to land, rather than the exact location. Stars fall approximately every two hours. They are specific to the world you are in, and will fall in a different spot in a different world. However, stars will only land near mines and banks. 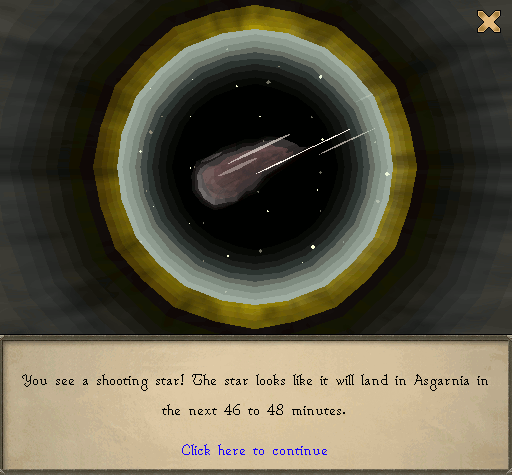 The Observatory, south of Ardougne, maintains a noticeboard, indicating recently arrived stars and who was first on site. 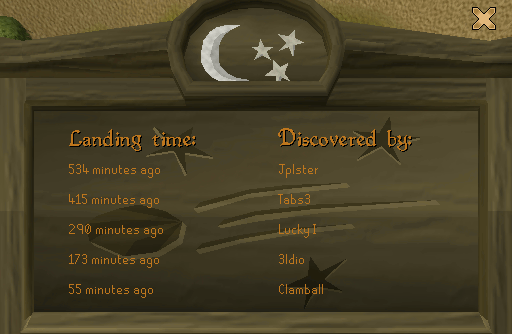 We recommend to do this in a clan chat with a group. Have teleports available to the other locations and each person cover one location in the potential area. Have one person in their Player Owned House checking with the best telescope available. When the star has landed, either quickly check the area you are in or move to where the star has landed. If you are trying to cover an area by yourself then have a route planned and all items needed to get there at hand. Do not forget your pickaxe and any stardust you may have in the bank. Many areas need quests or items to access, so be sure you can go to where the star lands before you decide to star hunt.

Fairy Rings: BLR (near Legends' Guild mine), and CLS (Hazelmere's peninsula, near Yanille).

Items Needed/Recommended: A Ardougne teleport, 30 coins for the boat ride (use a Ring of charos (a) and pay less), Karamja gloves, Spirit graahk pouch, Nature altar teleport, and a Amulet of glory (4).

Fairy Rings: DLQ (south of the Ruins of Uzer mine).

Items Needed/Recommended: Teleport crystal(4), money for the boat to the Piscatoris Fishing Colony (use Ring of charos (a) for a free boat ride), Spirit kyatt pouch, and a Spirit tree teleport to the Tree Gnome Stronghold.

When you have found a star, you can start mining it down to its core. Shooting stars can have as many as nine layers. You can find out what level star it is by simply examining it. By prospecting it, you can find out the level, and how much of the current layer has been mined. Each layer of a star requires of you to have a certain Mining level before you will be able to mine it. Getting through the layers of a large star will take a lot of time, so it is best if several people work on it at once. 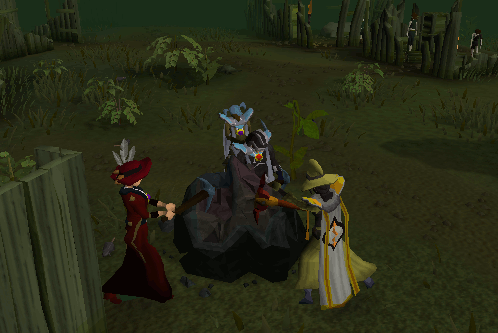 While mining the star, you will receive a certain number of Stardust. Once a star has been mined, a Star sprite will be released. Talk to this creature to exchange your stardust for a reward. Star sprites can only reward you once per day, and you can only carry or have in the bank a maximum of 200 stardust at any time. 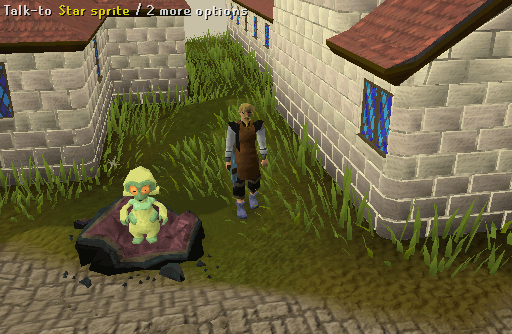 The stardust, obtained while mining a star, can be exchanged for a reward. To claim your reward, talk to the Star sprite, who appears when a star has been minded. Star sprites can only reward you once per day, and you can only carry or have in the bank, a maximum of 200 stardust at any time. For each stardust, you will receive a certain amount of Coins, Astral runes, Cosmic runes, and Gold ore. 200 stardust will yield you, 50002 coins, 52 Astral runes, 152 Cosmic runes, and 20 Gold ores.

If you are the first person to attempt to mine the star once it lands, you will be rewarded for finding the star. The reward is: 75 XP x your Mining level. E.g. level 50 miner gets 75 x 50 = 3750 experience. A pickaxe or required Mining level is not needed to claim this bonus. While mining you will be rewarded a certain amount of experience for each stardust received, depending on the layer mined.

As part of the reward, you have the chance to mine an extra ore from a rock for 15 minutes. This bonus stacks with the Varrock armour, making it possible to mine 3 ores from 1 rock.

Uncut gems such as, Sapphire, Emerald, Ruby, and Diamond, are found in the various layers of the star. Wearing an Amulet of glory will increase the chance of mining a gem.

This Distraction/Diversion Guide was written by Realruth. Thanks to Lanka, Clamball, Diana de wit, Graystar, Alfawarlord, Motion Man, Bladerman970, Hilwin1, Sire_TRM, and Beyer1982 for corrections.
This Distraction/Diversion Guide was entered into the database on Tue, Dec 09, 2008, at 08:56:43 AM by Alfawarlord, and it was last updated on Mon, Nov 06, 2017, at 02:50:20 AM by Numerous One.