0003
Penguin Hide and Seek
Description:
Larry, the zookeeper at Ardougne Zoo, is in charge of the penguins. He knows that penguins are a dangerous species, bent on conquering the whole of RuneScape. Now is your chance to help Larry.
Is this Distractions and Diversions Safe to play?:
No
Resets:
Weekly. You can also force one reset for this activity per week by using a D&D token (weekly).
Quests Required:
Items Recommended:
Starting Point:
Ardougne Zoo.
To Start:
Talk to Larry the Zookeeper.
Contents:
Getting Started:

Speak to Larry in the South West corner of the Ardougne Zoo, near the penguin exibit. His spot is marked on the map by a gold Distractions and Diversions game icon. He will give you a Penguin spy device to use while hunting the disguised penguins. Note that this device will not help when hunting the Penguin Agents. While you do not need to bring it in order to find the penguins, it offers several useful functions that may make the task easier. Please see the Penguin spy device item for mor information on what it can do. 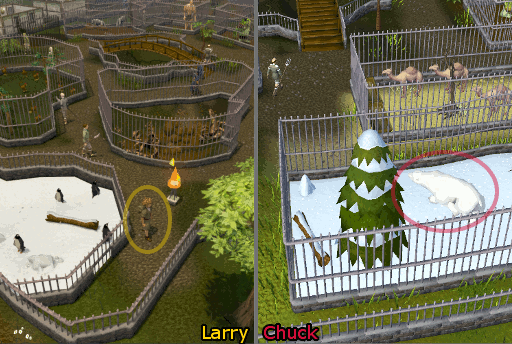 Note: Upon completion of Hunt for Red Raktuber, Larry will be replaced by Chuck the Polar Bear. Click the image above for their map locations.

Be aware that the locations for penguins not only changes each week, but they also differ between worlds. That means that players on world 60 (Official Penguin Hide & Seek world) will find their penguins in different locations compared to players on world 65 (Official Minigames Spotlight world) though there will be some overlap across worlds. As the penguins are constantly on the move, it may be easiest to work with a team because hunting for them on your own is a challenging task. Note that various Penguin Hunting Friends Chats can be found in the "PVP, Minigames and D&Ds" section of the Official RuneScape forums.

Penguins can wander all over RuneScape, including quest areas and the Wilderness. This means that some penguins may be un-spy-able if you have not completed the required quests (see above for a list). When you have spotted a penguin, simply click on it. This will start a short animation of you spying it and have you take note of the location so that you can report it to Larry or Chuck.

To help you on your search, you can ask Larry/Chuck for a location hint or use the "hint" feature on your Penguin spy device. They will provide you with a hint such as:

While working with others, it is important to know that it is possible to trap penguins. Assuming it is not too far from their spawn location, they will stay inside a room/building until the weekly reset occurs. Keep in mind that they must not be trapped into a single square as they will respawn if they do not move for 7 minutes. For trapping within a room to be successful, those entering the area to spy the penguin must close the door to keep the penguin trapped. Failure to do so is in bad form.

Note that penguins cannot move through players which are stationary or various environmental items such as rocks and closed doors. They can pass through a person, however, if someone else steps through/into the square first. This essentially opens a "doorway" for the penguin to escape. As such, use caution if you are trying to help herd a penguin into an area so that you do not accidentally create an opening for it.

There are 10 penguins hidden throughout Gielinor, 12 if you unlock them via quests. They have chosen their disguise carefully to blend in with their environment, making it hard for you to spot them. Below you can find a list of all the disguises that are possible.

During the Holiday seasons, the penguins are often disguised to suit the occasion.


Spying for the Polar Bear: 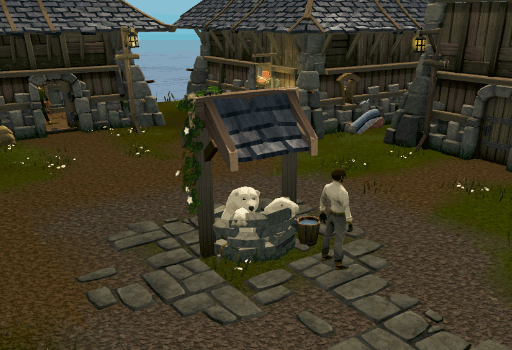 After you complete Some Like It Cold and Desert Treasure, you can earn an extra 3 points each week by hunting the Ghost penguin. This penguin differs from the regular penguins in that it teleports to a new location every couple of minutes, can only be seen and spied while wearing a Ring of visibility, and cannot be trapped.

Note that if you have spoken to Sliske in the Empyrean Citadel after completing The Shadow Sword, Fate of the Gods, and Ritual of the Mahjarrat you can receive his gift to see the Spirit Realm. This will allow you to see the Ghost penguin without needing the Ring of visibility to spy it.

These penguins are the best of the best. Top-notch spies that are better than the rest. Similar to the ghost penguin, these guys only spawn in specific areas for roughly 1 minute before leaving. Luckily though, these guys don't require any special unlocks to see them and they aren't disguised - they just waddle around with their briefcase.

Similar to the normal penguins, you will only be able to spot a certain number of them per week. Regardless of which agent number they are, you will only be able to spy on 10 Agents per week before you will need to reset. As this number is counted independently of the normal penguins, you can find a maximum of 22 (this is 12 normal penguins and 10 Agents) before you NEED to reset if you wish to do it twice in 1 week. Obviously you can reset before reaching this full amount, but you cannot spy anymore penguins once you reach this number, therefore you will have to reset if you want more penguins.

Once spotted by anyone, these highly trained operatives will despawn, leaving a random reward casket (easy, medium, hard, elite, or master) in your inventory. While it is very hard to find them as they despawn so rapidly, it is possible to find them by camping one of their known haunts and hopping worlds. Some of the locations at which Agents can be found include:

In addition to these Agents (001-006), there is a 7th Agent (007) who is even more elite than the rest. Unlike the others, this Agent will not spawn on its own. This one will occasionally spawn when spying one of the normal penguins and is only visible to the one who caused him to spawn. Same as the other agents though, he will disappear after being spied or after 1 minute so be sure to locate him quickly if you get a notification.

As you are spying penguins, you should notice not only that your number of penguins caught increases, but also that you are earning points. If you have completed Cold war, certain penguins (including Agents) will award you 2 points when spied. Finding all 22 "penguins" (this includes the Polar bear and Ghost penguin) can earn you up to 39 points per week without resetting. You can save up to 250 points before you must use them.

Stocked up on points, you can use them to purchase experience lamps or coins from Larry/Chuck. 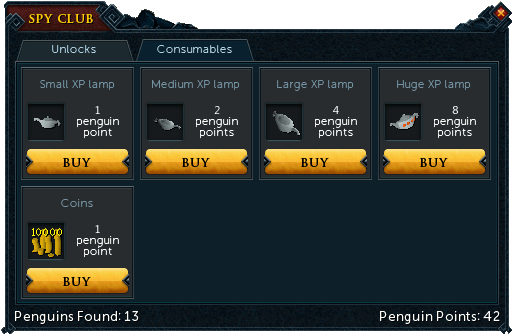 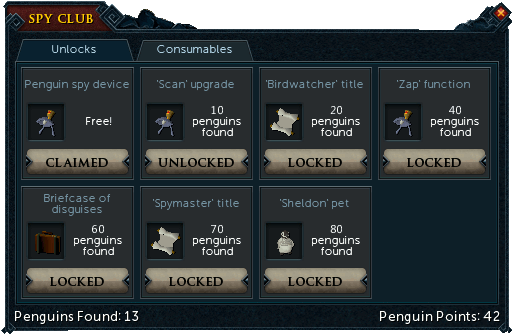